Headline inflation was at 0.6 per cent year on year in November, according to data released by the Monetary Authority of Singapore (MAS) and the Ministry of Trade and Industry (MTI) on Monday, higher than the 0.4 per cent seen in October and matching economist expectations. The authorities attributed the slight uptick to an increase in private road transport inflation and smaller declines in the costs of retail goods and accommodation, even as services inflation eased.

Core inflation, which excludes accommodation and private road transport costs, was flat at 0.6 per cent in November, lower than the 0.7 per cent estimate by private sector economists. MAS and MTI said lower services inflation was offset by a smaller decline in the cost of retail goods.

Private road transport inflation rose to 2.3 per cent year on year in November, up from 1 per cent in October. This was due to higher petrol prices and Electronic Road Pricing charges, the authorities said.

Solidarity Budget: S$600 cash payout for all Singaporeans above 21

Accommodation costs decreased by 0.2 per cent year on year in November, down from the 0.4 per cent fall in October, as housing rentals declined more gradually.

The cost of electricity and gas declined by 11.8 per cent year on year in November, less than the 12.5 per cent drop in the previous month. This is because the Open Electricity Market had a smaller dampening effect on electricity prices following a slowdown in new take-up rates, MAS and MTI said.

Services inflation inched down to 1.1 per cent in November, from 1.2 per cent in October. The authorities said this is largely due to a smaller increase in medical and dental treatment fees, even though telecommunication services fees rose after two consecutive months of decline.

"In the quarters ahead, external sources of inflation are likely to remain benign, amid weak demand conditions, and generally well-supplied food and oil commodity markets. However, oil prices could be volatile in the near term, reflecting geopolitical risks.

On the domestic front, labour market conditions are softening slightly. This would lower wage growth in 2019 and 2020, compared to 2018. At the same time, non-labour costs such as retail rents should stay subdued, and any cost pass-through to consumers would be constrained by the weaker economic environment," MAS and MTI said. 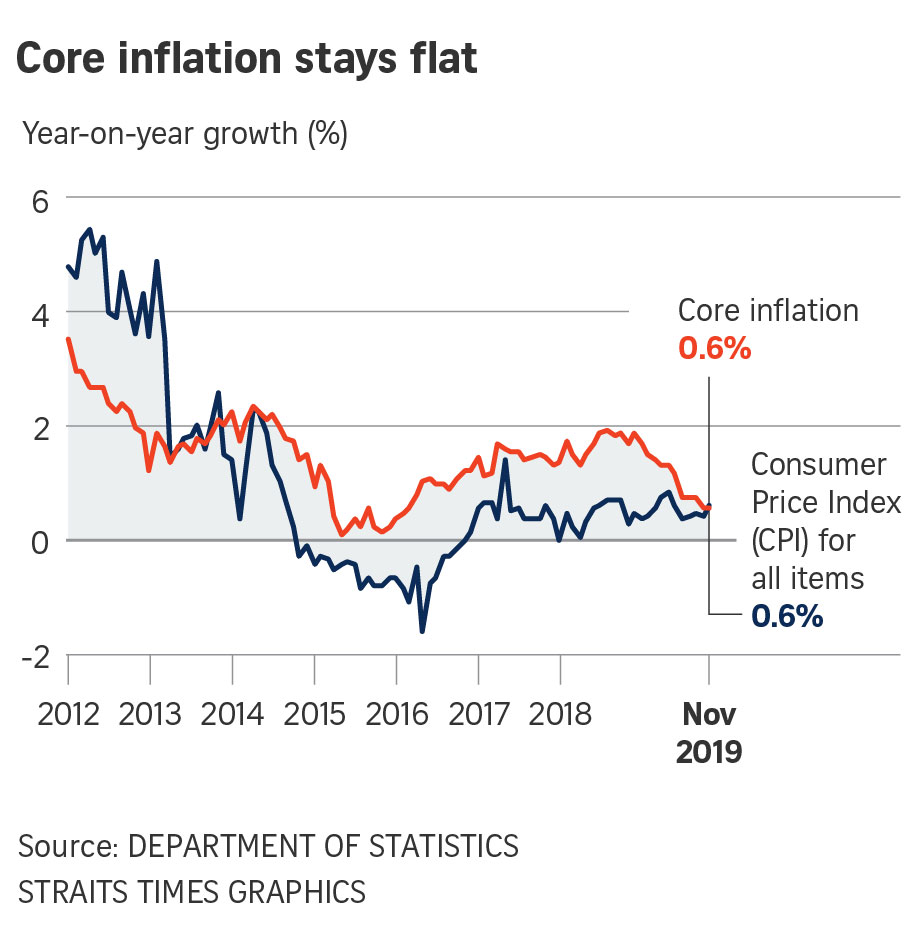 Robots may become heroes in war on coronavirus

New US jobless data to add to skyrocketing unemployment

The Association of Banks in Singapore will give away S$500,000 as a reward to small businesses that sign up for...

TRADING activity in the Singapore Exchange's (SGX) securities and derivatives surged in the month of March, as...

[HONG KONG] Stocks in Hong Kong ended with a healthy rally Thursday, in line with an advance across Asia, with...

[LONDON] European stock markets rallied in early deals Thursday after gains across Asia and a surge on Wall Street...

[SYDNEY] Australian shares closed higher on Thursday amid hopes the coronavirus outbreak was nearing a peak in the...