Economists point to high base in Dec 2016; full-year NODX rise of 9.2 per cent is strongest since 2010
Chia Yan Minchiaym@sph.com.sg@ChiaYanMinBT
At first glance, Singapore's December export data seems to show that the trade-driven lift fuelling the economy over the past year has started to fizzle out.
BT PHOTO: JAMIE KOH

AT FIRST glance, Singapore's December export data seems to show that the trade-driven lift fuelling the economy over the past year has started to fizzle out.

But dig deeper and a more optimistic picture emerges.

While last month's performance was weaker than expected, it capped a stellar year, with export growth hitting a seven-year high on the back of a global electronics boom.

In addition, the numbers were dragged down by currency and base effects, which means exporters did better in December than the data suggests.

Non-oil domestic exports (NODX) went up 3.1 per cent last month, undershooting economist estimates of an 8.6 per cent rise; it was also much slower than the preceding month's 9.1 per cent increase.

This came as electronics exports - a key growth driver for the economy over the past year - declined 5.3 per cent compared with the same month a year earlier, according to data out on Wednesday from trade agency IE Singapore.

Non-electronics shipments made up the shortfall, rising 6.8 per cent.

Last month's slide in electronics NODX was due in part to a high base in December 2016, when the explosion in semiconductor manufacturing first started fuelling a trade-driven turnaround in Singapore's economic fortunes. 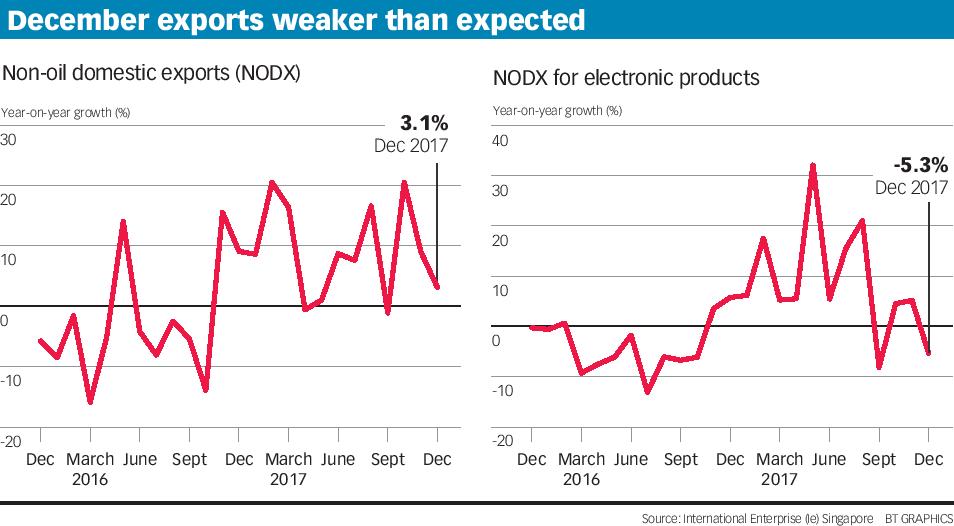 "December is usually a quieter month, but December 2016 was abnormal because it coincided with the start of the electronics cycle," said CIMB Private Bank economist Song Seng Wun.

"This December was a more 'typical' year-end."

The Singdollar appreciated about 6.2 per cent against the greenback between December 2016 and 2017.

International trade is usually carried out in US dollars, but Singapore reports its trade data in Singdollars, he noted.

"If you take that into consideration, NODX expanded by 10 per cent in December in US dollar terms.

"This means the outlook on the export front is not as bad as what the numbers suggest," he added.

For the whole of 2017, NODX grew about 9.2 per cent, taking into account the latest December data.

This was the strongest pace of expansion since 2010, blowing past official forecasts. Trade agency IE Singapore had tipped NODX to rise 6.5 per cent to 7 per cent for the full year.

Economists say the global economy is expected to remain robust this year, which bodes well for Singapore's trade outlook.

But exports, including electronics, the top performer, are expected to grow at a more sedate pace as the trade recovery stabilises.

Mr Song said: "The momentum will be maintained, but we are not going to see strong double-digit year-on-year growth numbers like we did in 2017, partly because of the high base."

Mr Seah said export numbers over the next couple of months are likely to be volatile because of the Chinese New Year.

"Plants in China, who are key buyers for components and intermediate products, will typically ramp up production ahead of the festive period before shutting down their production during the holiday.

"Moreover, the festive season falls on different months every year - February this year, versus January last year. This exacerbates the volatility in the (data) and distorts the overall NODX figures.

"Hence, it pays to take the NODX and industrial production figures during this period of the year with a pinch of salt," he added.

OCBC economist Selena Ling flagged other potential risks. She pointed out that shipments to half of Singapore's top 10 NODX markets, including China, shrank in December.

"This bears watching to see if the December slump to China is a seasonal blip, since China is the hub of the global supply chain and an important market for final demand in the region as well," she noted.

[NEW YORK] Walt Disney's new Disney+ streaming app was downloaded more than half a million times over the weekend...

[GENEVA] The World Health Organisation (WHO) is reviewing a report that suggested its advice on the novel...

[HONG KONG] Hong Kong's government on Monday ordered schools to review and remove any books that might breach a...

THE Government Technology Agency of Singapore (GovTech) and analytics...