Chuang Peck Mingpeckming@sph.com.sg@PeckmingBT
Central Provident Fund (CPF) contribution hikes for older workers will kick off on Jan 1, 2021, with employers and employees each increasing their contribution by either 0.5, or 1 percentage point, depending on the age bands.
PHOTO: ST FILE

CENTRAL Provident Fund (CPF) contribution hikes for older workers will kick off on Jan 1, 2021, with employers and employees each increasing their contribution by either 0.5, or 1 percentage point, depending on the age bands.

Subsequent increases will not exceed 1 percentage point for either the employer or the employee, according to details released on Monday of the changes to be made on retirement and re-employment age as well as CPF contributions.

The move to introduce the changes was announced on Sunday when Prime Minister Lee Hsien Loong, in his National Day Rally speech, said the government has accepted in full the recommendations of the government-appointed Tripartite Workgroup on Older Workers.

According to Mr Lee, the Workgroup has proposed that CPF contributions for older workers be raised. Also, the retirement age should be extended from 62 to 65, the re-employment age from 67 to 70 - and all these are to be achieved in gradual steps by around 2030.

In its report entitled Strengthening Support for Older Workers, the Workgroup headed by Manpower Ministry's Permanent Secretary Aubeck Kam, has spelt out that the total CPF contribution rate for workers aged 55 to 60 should be raised to 37 per cent in the longer term.

An increase in CPF contributions, which are tied to wages, tend to make a worker less attractive to hire. But the Workgroup, made up of government, union and employer representatives, didn't expect its proposed increase for workers aged 55 to 60 to reduce the employability of these workers, because the employment rate of workers in this age group has jumped from 64.2 per cent in 2008 to 72.7 per cent in 2018.

For workers aged 60 to 70, the Workgroup, which is advised by Manpower Minister Josephine Teo, Singapore National Employers Federation president Robert Yap and National Trades Union Congress secretary-general Ng Chee Meng, suggested that the hike in CPF contribution rate could be "smaller but meaningful".

"Given that the rate target remain lower than for younger age groups, there is lower risk of reduced employability and take-home pay," it said.

The total CPF hike for workers aged above 70 should stay unchanged at 12.5 per cent, according to the Workgroup. The Workgroup felt the retirement and re-employment age are still relevant in ensuring Singaporeans continue to work, while providing businesses experienced workers to tap.

It's also realistic and reasonable to increase the retirement and re-employment age by three years to 65 and 70 respectively in 2030, because of improvements in health, and better-educated and higher-skilled workers today. It recommended that the changes be made in stages, starting July 1, 2022, when the retirement age goes up to 63 and the cap on the re-employment age lifted to 68.

"Subsequent increases should be one-year increases in both retirement age and re-employment age each time," it said. "The tripartite partners should closely monitor the outcomes of this first move and take into account prevailing economic and labour market conditions before finalising the dates of the second and third round of increases." To keep some flexibility for businesses, the Workgroup said the minimum period for re-employment contracts should remain at one year.

To reflect the higher wage levels, which are likely to rise further, the Workgroup suggested that the Employment Assistance Payment - intended for workers eligible for re-employment but the employer is unable to re-hire them - be raised from the current S$5,500-13,000 (for workers in the age group of 62 to below 64.5); to S$6,250-14,750 (for workers aged 63 to below 65.5).

For workers recruited at 55 and over, the qualifying period for eligibility of re-employment should be reduced from three to two years, according to the Workgroup. 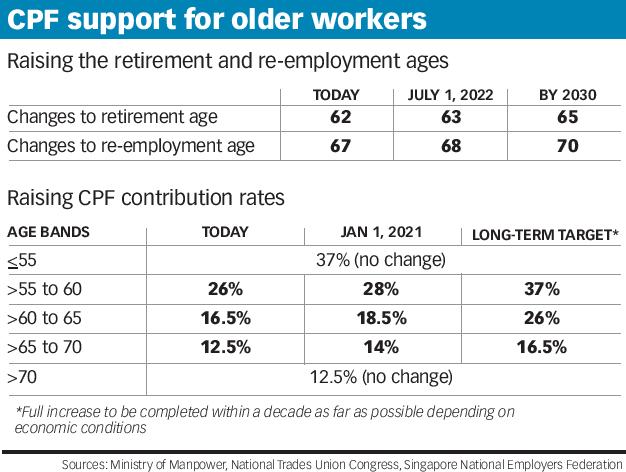 21 new Covid-19 cases in Singapore, none in the community

[SINGAPORE] There were 21 new coronavirus cases confirmed as of Tuesday noon, taking Singapore's total to 57,627....

[HANOI] Taiwan's Pegatron is seeking to invest US$1 billion in three phases in production facilities in areas such...

[SEOUL] South Korean shares dropped 2.4 per cent on Tuesday, logging the sharpest decline in a month, as investors...

Are exotic skins out of fashion?

[STOCKHOLM] Something was clearly missing from Stockholm Fashion Week's virtual catwalk Aug 25 and it wasn't just a...