Lynette Khoo
A commercial site at Beach Road with at least a 70 per cent office component has been triggered for sale under the Reserve List of the government land sales (GLS) programme, reinforcing analysts' perception that a recovery in sentiment for the office market is underway.
PHOTO: URA

A COMMERCIAL site at Beach Road with at least a 70 per cent office component has been triggered for sale under the Reserve List of the government land sales (GLS) programme, reinforcing analysts' perception that a recovery in sentiment for the office market is underway.

The Urban Redevelopment Authority (URA) said on Wednesday that it has accepted an application from a developer to put up the site for public tender. The unidentified developer has committed to bid at a price of no less than S$1.138 billion.

This two-hectare land parcel, which has a 99-year leasehold tenure, will have a maximum permissible gross floor area (GFA) of 88,313 sq metres.

At least 61,820 sqm has to be for office use. The remaining GFA can be developed for additional office, retail (subject to a maximum GFA of 3,000 sqm), hotel, serviced apartment and/ or residential uses.

JLL national director for research and consultancy Ong Teck Hui noted that the triggering of this site comes in tandem with positive investment sentiment in the office property market and also "at a time when office rents appear to be firming after two years of decline".

It would not be surprising if the unsuccessful bidders for the Central Boulevard site last November contest again for the Beach Road site, he added. "If residential use is incorporated in the development, it would coincide with an expected upturn in the residential market." 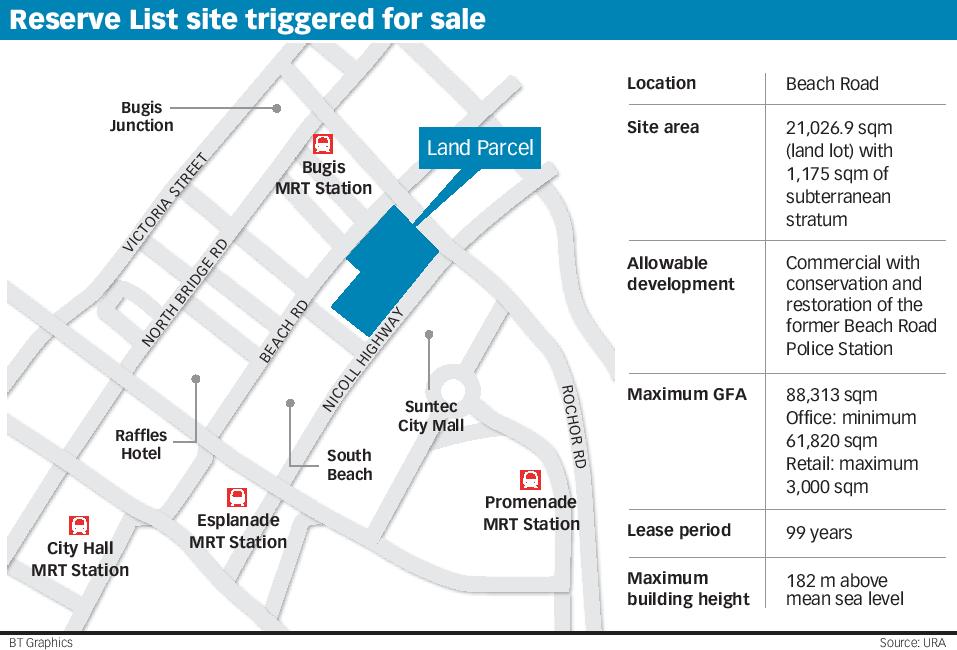 Most consultants expect at least 10 bids from a mix of local and foreign developers, with the winning bid in the range of S$1,400-1,700 per square foot per plot ratio (psf ppr).

Savills Singapore research head Alan Cheong flagged that the public tender for the Beach Road site may cause an upward adjustment of expectations of what values should be for CBD Grade-A offices.

Lee Nai Jia, head of South-east Asia research at consultancy Edmund Tie and Company, felt that with office rents of newer buildings stabilising and sentiment in the residential market improving, it is a good time to enter the market.

"There is much capital due to the low interest rate environment and limited supply of developments available in the market," he said.

The keen interest in CBD office developments has also spilled over to the Beach Road area, he added. "We anticipate that new developments such as DUO and South Beach will rejuvenate the area, with more companies willing to relocate there."

The former Beach Road Police Station sits on the site and the developer is expected to conserve and restore the building. The developer is also required to build an underground pedestrian link to the nearby Bugis MRT station.

Apart from any GFA for hotel, serviced apartments or residential use, the rest of the development's GFA cannot have more than three strata lots, thus prohibiting strata sub-division of the commercial and retail components.

Some consultants felt that the conservation of the former Beach Road police station on the site will enhance the character of the development.

Knight Frank head of research and consultancy Alice Tan noted that while the conservation element may cap building efficiency of the project, this conservation building fronts the main Beach Road, allowing the developer to introduce some highly visible and attractive retail concepts.

Ms Tan envisaged the Beach Road/ Ophir-Rochor area to shape up as a business enclave with this commercial development, along with DUO, South Beach and Suntec City. "This location has its distinctive uniqueness, being near Bugis with its attractive array of recreational, retail and hospitality amenities," she said.

The Beach Road site was first made available for sale on the GLS Reserve List in November 2014. URA said the public tender will be launched in about two weeks with a tender period of 12 weeks.

[LOS ANGELES] Amazon.com is launching a new fleet of bigger, boxier trucks like those favoured by rival package...

Exxon Mobil resumed drilling in Guyana last month, underscoring its dedication to the offshore hotspot despite the...

[NEW YORK] The fortune of Tesla's founder rose US$6.1 billion on Friday, according to the Bloomberg Billionaires...

[NEW YORK] The Federal Reserve's balance sheet will probably peak at a smaller size than previously expected due to...

[WASHINGTON] The Trump administration on Friday announced additional duties of 25 per cent on French cosmetics,...