Sales of new private homes in 2016 hit 3-year high; realistic pricing helped EC sales to their best in 4 years
Kalpana Rashiwalakalpana@sph.com.sg@KalpanaBT
An artist's impression of Lake Grande. The condominium by Jurong Lake sold 552 units in a year which saw developers launch 7,853 private homes - up 11.3 per cent from 2015.

DEVELOPERS sold 8,136 private homes last year, up 9.4 per cent from the 7,440 units they moved in the previous year - and the best showing in three years. The pick-up is a reflection of improved sentiment and demand, say analysts.

The executive condo (EC) market posted even more spectacular sales growth. Preliminary government numbers show that developers found buyers for 4,018 EC units last year - up 57.6 per cent from the 2,550 units in 2015 and a four-year high. Realistic pricing by developers has been cited as a key factor for the improved primary-market sales of ECs, which are a public-private housing hybrid.

The 2016 sales figures are preliminary, based on the December developer housing sales data released on Monday by the Urban Redevelopment Authority. The numbers will be finalised on Thursday next week when the URA releases its full Q4 2016 private housing statistics.

For this year, property consultants polled by The Business Times mostly forecast sales of 8,000 to 9,000 private homes and 2,300-3,500 EC units in the primary market.

In terms of developers' pricing strategy for 2017, "affordability will rule the day", as JLL national director Ong Teck Hui put it. "Developers will have to be mindful about pricing because it's still a price-sensitive market on account of the property cooling measures and rising interest rate environment..."

CBRE Research head of Singapore and South-East Asia Desmond Sim, too, noted that unemployment is expected to rise in 2017 while GDP (Gross Domestic Product) will see muted growth.

"I think the pricing strategy for developers remains pretty much a quantum play. You need to hit the sweet spot of S$1 million or below to achieve sales volumes. Given that land prices have risen in the past 12 months, the clear denominator to play around with would be the unit size - in terms of maintaining the sweet spot," Mr Sim reasoned.

Cushman & Wakefield Singapore research director Christine Lim pointed to a "silver lining" for developers who paid for higher land prices last year and are now stuck with less elbow room to price their projects attractively: "Construction costs have fallen due to the slow economy, which helps to alleviate cost pressures for developers."

Agreeing, a developer who declined to be named said that construction costs have eased about 10 per cent in the past six months as contractors are hungry for work. "So where the construction cost used to be S$300 per square foot (psf) on gross floor area half a year ago, it is now S$270 psf." He also noted that "projects in good locations and priced reasonably can still move". 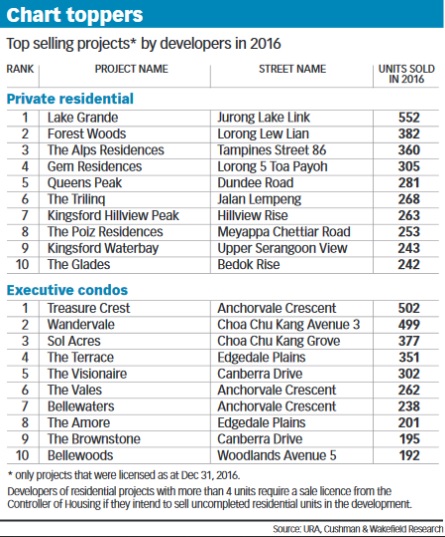 Despite the subdued December sales figure amid the year-end holiday period, the preliminary number of private homes sold by developers in Q4 2016 was 2,480 units - the strongest quarterly volume since Q2 2014.

Coupled with the 9.4 per cent increase for the whole of 2016, "this reflects a moderate strengthening in demand - driven by a perception of the market bottoming out, pent-up buying, more realistic prices and acceptance of the cooling measures as a norm", said Mr Ong.

In the EC segment, 213 units were sold by developers last month, down slightly from the 251 units in November, but an improvement on the 124 units in December 2015.

The 57.6 per cent jump in EC sales last year was despite a 26.7 per cent contraction in the number of new ECs launched to 2,749 units. Mr Ong attributed the pick-up in sales to more realistic pricing, which resulted in median prices of new ECs easing about 5 per cent between Q1 2015 and Q4 2016.

SLP International executive director Nicholas Mak is sanguine about buying strength. "Demand for both new private homes and ECs is still there. Buyers are coming round to the view that there is limited benefit in waiting for further price declines at new launches, and those who can afford it would be inclined to enter the market."

That said, the number of units developers manage to sell this year will be more a function of supply, he added.

According to ERA Realty Network's data, only two new EC projects totalling around 1,000 units are slated for launch this year - Qingjian Realty's iNz Residence in Choa Chu Kang Avenue 5 and a project by Hoi Hup in Yio Chu Kang Road. In addition, there are about 3,000 unsold units in EC projects that are already on the market, ERA noted. The agency's key executive officer Eugene Lim predicts primary-market sales of 2,500 to 3,000 ECs this year.

Ms Li of Cushman & Wakefield, who predicts an increase of up to 10 per cent in the number of private homes that developers will move this year to 8,950 units, said: "Transaction volume could be sustained due to the still relatively benign interest rate environment, good attributes of pipeline projects and ample liquidity in the market.

"There will be some additional demand from foreign buyers, particularly from the mainland Chinese after Hong Kong recently raised the stamp duty rate on non-residents who buy residential properties from 15 per cent to 30 per cent."

HYFLUX said on Friday that one of its units has received a notice of termination in respect of the operations and...

'No benefit' from hydroxychloroquine for Covid-19: major UK trial

[PARIS] A major British trial of hydroxychloroquine has found it has "no benefit" for patients hospitalised with...

VW board to review internal probe into racist car ad

[HAMBURG] Volkswagen has completed an internal report into how it came to publish a racist advert, the German...

US: Wall St jumps on surprise fall in unemployment rate

[NEW YORK] US stocks jumped at the open on Friday after a closely watched report showed a surprise drop in the US...