Home owners keen on China buyers' deep pockets and appetite for large sites; consultants believe they won't bite at irrational prices
Lynette Khoo
For Normanton Park, its land rate of S$969 per square foot per plot ratio is the highest achieved for a 99-year leasehold collective sale site this year. One consultant noted that property owners attempting en bloc deals are starting to ask if there is any interest from Chinese developers, who are seen as having deep pockets to buy them out.
FILE PHOTO

FOREIGN developers - those from China in particular - sense there's a killing to be made from Singapore's feverish en bloc market.

Amid limited options under the government land sales (GLS) programme, a few have plunged headlong into the game while several others are sussing out information on available en bloc sites and learning how the process works. It may only be a matter of time before more will emerge with en bloc trophies in hand, market watchers say.

Before 2016, there were more sites under the GLS programme than in the en bloc market, so developers hardly considered en bloc sites back then, JLL regional director of investments Tan Hong Boon observed.

Foreign developers have historically been less comfortable with the en bloc process, a more cumbersome and protracted process than the straightforward purchase of land through the GLS. But since last year, the Chinese developers are starting to bite, signalling a paradigm shift.

Chinese developers are also keen to hold commercial properties here for recurring income. In July, a buyer said to be linked to the Zhao family from China acquired freehold industrial complex Citimac.

Talk in the market is that the SingHaiyi joint venture was in such hurry to seal the deal for Sun Rosier that it came without representation from lawyers and without amendments to any terms in the collective sales agreement. 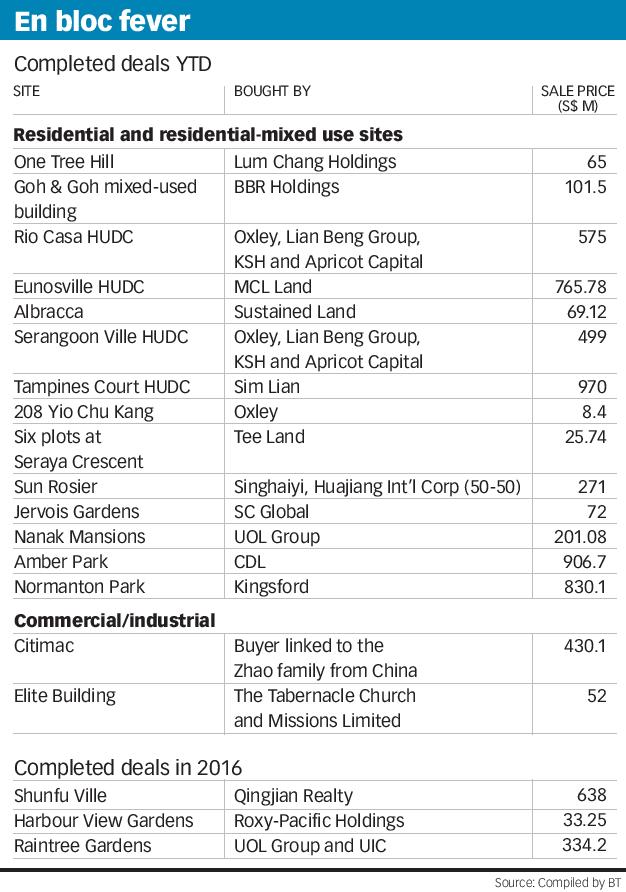 Norman Ho, partner at Rajah & Tann, felt that the rush among developers - not only foreign developers - to replenish their landbank through en bloc sites is ironic given that they are spoilt for choice, with as many as 60 sites said to be in varying stages of the en bloc process.

But competition for attractive sites may heat up as those Chinese developers that were active in GLS tenders in the past have warmed to the collective sales process, he said.

Chinese players that are said to be scouring for deals include China Construction, Hao Yuan Investment and Nanshan Group. The latter is not new to the en bloc scene, having bought Irving Industrial Building through a collective sale in late 2014.

MCC Land CEO Tan Zhiyong told BT: "We have been closely observing the recent wave of en-bloc activities and will be keen to participate in a tender if an opportunity arises."

But he is wary of over-exuberance in developers' bids. "The current residential property market seems to be stabilising and recent new launches have also been well received. However, with a likely rise in supply of new projects coming into the market in the next couple of years arising from these en-bloc activities, how the future market will react to home prices that may rise in tandem with tender prices remains to be seen."

Swee Shou Fern, senior director for investment advisory at Edmund Tie & Company, said that a majority of Chinese developers studying en bloc sites now are those who have been active in the GLS market. "We may start to see Chinese bidders emerging as successful bidders in the upcoming collective sales sites. But they are selective - those I've spoken to only want prime location that is freehold."

Some observers note that despite the initial apprehension among foreign developers towards the en bloc market, there are no real barriers to entry. They can gain access to local market knowledge through local consultants and lawyers or local staff. The Chinese players also have the capacity to take on large sites.

Interestingly, Chinese developers may have crossed a mental hurdle towards the en bloc sale concept, as collective sales are not common in China or Hong Kong, a corporate lawyer said.

The only bugbear, perhaps, is the uncertain redevelopment timeline for en bloc sites and how the market may turn by the time a project is launched. While it typically takes just three months for legal completion of a GLS site acquisition, it may take up to a year or even longer for legal completion of the acquisition for en bloc sites if there are disputes with owners.

But will Chinese developers start setting new highs in prices for en bloc sites? For Normanton Park, its land rate of S$969 per square foot per plot ratio is the highest achieved for a 99-year leasehold collective sale site this year. One consultant noted that property owners attempting en bloc deals are starting to ask if there is any interest from Chinese developers, who are seen as having deep pockets to buy them out.

JLL's Mr Tan felt that the Singapore government would not be worried just because they are overseas players; local developers have been bidding aggressively too. But the government is concerned whether prices are rising within an acceptable range or not.

Agreeing, Mr Lian of Huttons do not see foreign developers as an irrational lot. "Regardless of the plot's potential, it will not get a single bid if it is overpriced. Foreign developers will still do their sums."

WATCH-listed USP Group announced in a regulatory update on Sunday that it is seeking US$11 million in damages from...

SOME 414 units of the 700-unit executive condominium Parc Central Residences were sold at an average price of S$1,...

MAINBOARD-LISTED retailer FJ Benjamin Holdings announced in a regulatory update on Sunday that it has obtained an in...