There were 1,657 HDB resale transactions in March, up from the 1,314 units sold in the previous month, according to according to flash estimates from real estate portal SRX Property on Thursday.
PHOTO: ST FILE

THE volume of Housing Board (HDB) resale flats grew by 26.1 per cent in March, marking the highest jump in eight months since August last year.

There were 1,657 HDB resale transactions in March, up from the 1,314 units sold in the previous month, according to according to flash estimates from real estate portal SRX Property on Thursday.

However, resale volume in March was 12.7 per cent lower than the 1,897 units transacted in the same month last year.

OrangeTee & Tie research head Christine Sun noted that the increase in resale volume in March could be seasonal as there were similar trends in the past two years.

Property activities typically pick up after the Chinese New Year festive celebrations as sellers and buyers become more active in listing and searching properties, she noted.

"We may expect sales transactions to pick up further in the coming months as more flats will be reaching their five-year minimum occupation period and (will be) ready for resale," said Ms Sun.

SRX data also showed that resale prices inched up by 0.2 per cent in March, compared with February.

But this was still a one per cent decline from last March, and down 13.7 per cent from their peak in April 2013.

The resale prices of three-room flats rose by 0.8 per cent and for executive flats, this was up 0.4 per cent. Prices dipped 0.2 per cent for four- and five-room units.

Resale flats in mature estates saw their prices drop 0.1 per cent, while those in non-mature estates were up 0.5 per cent as compared with February.

Experts noted that the price dip in mature estates could be due to the general price weakness of older flats in these estates.

However, Ms Sun said that buyers' perception of older flats may change as the Government implements new CPF loan rules on the purchase of older flats. 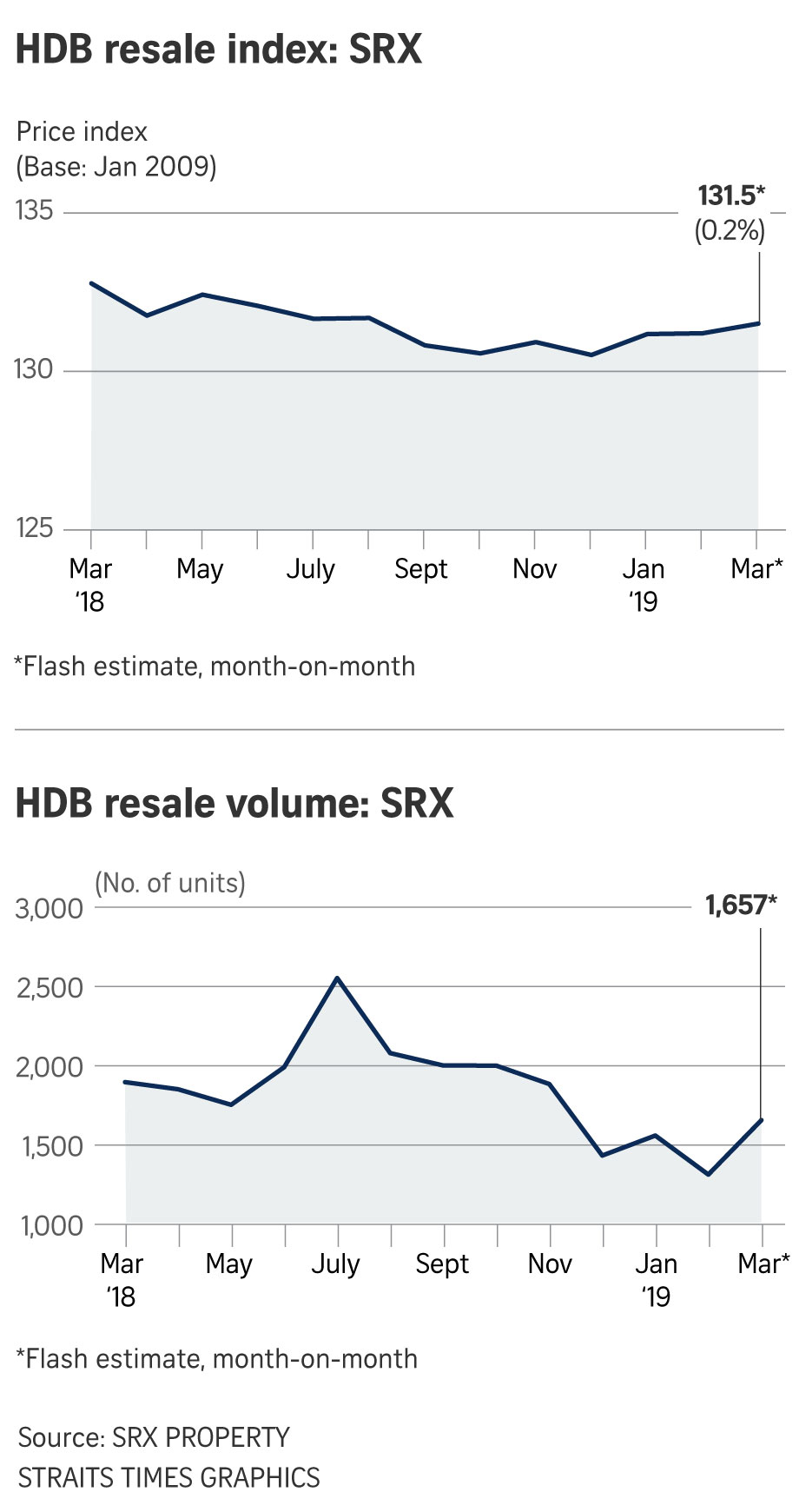 The Government is also due to release more details on the Home Improvement Programme II (HIP II) and the Voluntary Early Redevelopment Scheme (Vers) programmes.

Ms Sun added that potential buys can look at older flats in mature estates as these still have many positive attributes, such as their proximity to the city centre and spaciousness.

Buyers who move into flats in mature estates to live closer to their parents may also benefit from the Proximity Housing Grant, she added.

Meanwhile, the premium buyers were prepared to pay over market value - as measured by SRX's computer-generated overall median transaction over X-value (TOX) - rose S$1,000 to zero in March.

Only three-room flats recorded a negative median TOX of S$3,000.

US firms giving perks to get workers back to their offices

[HONG KONG] Hong Kong's economy contracted 3.4 per cent in the third quarter compared with a year earlier, the...

SINGAPORE shares extended its losses on Friday, capping a bruising week riddled with consternation amid a renewed...

Nanofilm closes 12.4% up on trading debut

Times are bad, putt golf membership prices are teeing off