In Urban Land Institute and PwC's latest report, office and residential assets hit the sweet spot with investors amid partial easing of cooling measures
Lee Meixianleemx@sph.com.sg@LeeMeixianBT
Singapore's property market has improved drastically in its investment prospect rankings, going from near the bottom of the table in 2017 to third place in 2018.
PHOTO: ST FILE

SINGAPORE'S property market has improved drastically in its investment prospect rankings, going from near the bottom of the table in 2017 to third place in 2018.

This follows a huge resurgence in investor sentiment this year, particularly in the office and residential sectors - two markets that are said to have bottomed out, although a survey of 600 real estate professionals reveals some sceptics who think the "bottoming" may be premature.

The Emerging Trends in Real Estate Asia Pacific 2018 report, a real estate forecast published by the Urban Land Institute (ULI) and PwC, noted that office rents in Singapore have firmed earlier than expected, while the completion of CapitaLand Commercial Trust's mega S$2.09 billion acquisition of Asia Square Tower 2 from BlackRock has galvanised the local market and set a new benchmark for valuations.

The residential sector is also showing signs of recovery with rising transactions and a slight uptick in pricing for the first time in four years. Sales of developer sites have also surged amid tightening supply as developers seek to replenish their land banks.

"The rebound seems likely to be sustainable, given several years of pent-up consumer demand. The Chinese developers have also been active in buying land, pushing up land auction prices for residential sites significantly through 2017," the report noted.

The residential market rebound could have been helped by a partial lifting of government cooling measures, which relaxed the conditions of the seller's stamp duty in March this year. This does little to help investment funds, however, because extra costs in the form of other applicable stamp duties are still a drag on returns.

The report is based on the opinions of more than 600 real estate professionals, including investors, developers, property company representatives, lenders, brokers and consultants. 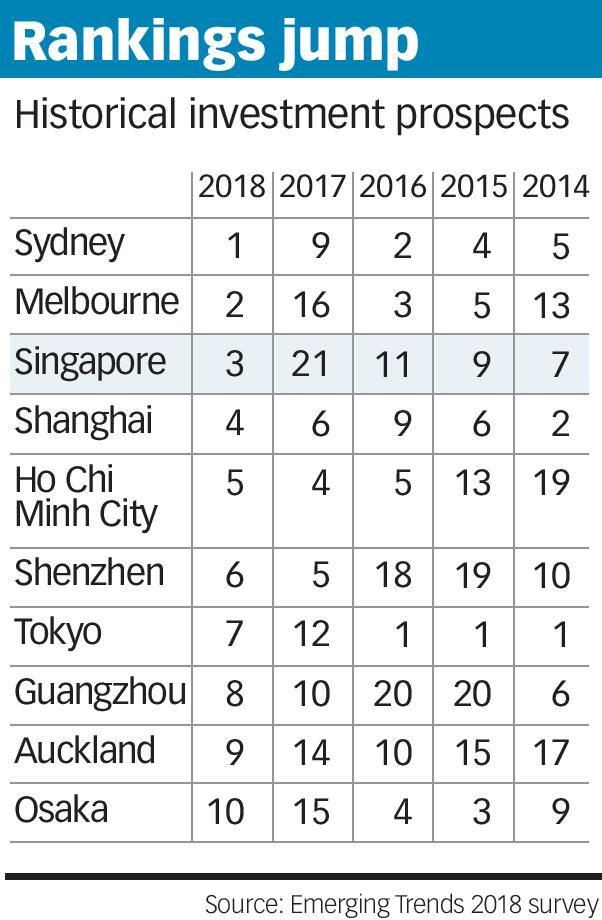 There were some respondents, however, who see talk of a bottoming in Singapore's office property market as premature. According to one fund manager interviewed, business confidence is still low, supply abounds, and tenants are not really expanding.

"It's challenging to bring foreign workers in because the government has responded to local concerns to protect jobs, and at the same time a lot of the European banks are downsizing, which hits demand for space. I don't want to be negative, but we're not seeing a big pipeline of deals that interest us," the fund manager said.

Colin Galloway, ULI consultant and principal author of the report, said it is "sentiment basically" that has moved Singapore from second- last in a list of 22 investment destinations to third place. Investors want to get in early on the upturn cycle, and are okay even if future performance shows that the market has not yet reached its trough and it continues sideways for a while.

"If you get in early, then a lot of people don't mind too much if they have to hold the assets for a couple of years while the market turns around. That's not a big deal for them... if they lose two years simply because the market is slow to turn," said Mr Galloway.

THE 496-unit executive condominium project Parc Canberra has sold at least 64 per cent or 316 apartments at an...

MAINBOARD-LISTED ASL Marine managed to halve its second-quarter losses as a result of cost reduction. The company...

FAMILIES will get help with daily expenses and firms can look forward to tax rebates in the Budget on Tuesday as the...

MAINBOARD-LISTED SIA Engineering has entered into a joint-venture agreement with Air Innovation Korea to form a line...