Three successful en bloc deals this year, valued at S$1 billion, may be igniting the interest of other property owners to do the same
Lynette Khoo
The success of three residential enbloc deals this year may be igniting the interest of more property owners to go down that route, considering the number of projects that have kick-started the collective sale process.
PHOTO: ST FILE

THE success of three residential enbloc deals this year may be igniting the interest of more property owners to go down that route, considering the number of projects that have kick-started the collective sale process.

This came after three en bloc deals racked up over S$1 billion in value this year, up from one S$380 million deal in 2015 and zilch in 2014. The average annual value of collective sales from 2010 to 2013, however, was S$1.9 billion, comprising mainly small and medium-sized deals.

JLL international director and head of residential Karamjit Singh noted that the pick-up this year was underpinned by a recovery of developers' residential outlook from negative to neutral-positive, a shortage of development sites as well as the strong attributes and realistic pricing of en bloc sites available this year.

For Lakeside Towers, the collective sale committee is now going through the tender submissions from property and legal consultants, after which a collective sale agreement with a reserve price will be drafted. Such agreement will require the signatures of owners holding at least 80 per cent of the development's share value and strata area for the property to be put up for public tender.

"We reckon that S$250-300 million in tender price should be comfortable to a single developer," the CSC chairman Simon Lee told BT. The site at Yuan Ching Road, which now houses 144 apartments, spans 153,237 sq ft with a plot ratio of 2.1 and has a balance lease of 58 years.

While it is still early days to determine how much each owner can receive from the sale, Mr Lee said he expects the site to receive a premium for its proximity to Jurong Gateway, Singapore's second CBD, and the future High Speed Rail (HSR) station. It is also near the Lakeside precinct where the Jurong Lake Gardens, the new Science Centre and Jurong Innovation District are located.

According to Cushman & Wakefield, premiums in enbloc deals generally range between 20 and 30 per cent, to as much as 50 per cent or more if each unit were to be sold individually in the open market. But it is estimated that four in five collective sale exercises conducted over the past five years have failed. 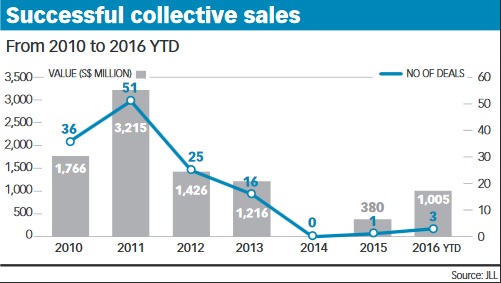 There were as many as 20 projects that tried to sell collectively over the last four years but failed to find a buyer at the price they were seeking, Mr Singh of JLL estimated.

Developers are also mindful of the 15 per cent additional buyer's stamp duty (ABSD) that they will incur if they are unable to develop and sell all the units in a project by the end of the five-year remission period.

But en bloc sales are just about the only source of supply for freehold sites, although leasehold sites are also fairly common now.

Developers still find buying from the government land sales (GLS) programme to be more straightforward, Mr Tan said. Thus, the first-half 2017 GLS list "will be something to look out for". But based on CBRE's recent interaction with developers, they are very keen to look for collective sale sites in good locations and attractive pricing, he added.

This year, a joint venture (JV) of UOL Group and United Industrial Corporation snapped up Raintree Gardens in Potong Pasir for S$334.2 million in October; Chinese developer Qingjian Realty bought Shunfu Ville from owners for S$638 million in May; while Singapore-listed Roxy-Pacific Holdings scooped up Harbour View Gardens in Pasir Panjang for S$33.25 million in August. The only enbloc deal last year was the sale of a commercial property off Orchard Road, Thong Sia Building, to Sin Capital Group for S$380 million.

"Next year, I expect more and a wider range of offering in the market, mainly of small and medium-sized en blocs, which should find takers among developers who are keen to have a new project to work on, as long as they are realistically priced," Mr Singh said.

But the total tally by value may not necessarily surpass this year's S$1 billion since land sales supply from the government may pick up, he added.

Among other collective sale hopefuls, one project that may hit the market in the first quarter next year is Cairnhill Mansions in District 9, which had made four previous collective sale attempts, the latest in 2014.

The other project that could become ready around the same time is the 12-unit Villa D'Este on Dalvey Road in prime District 10 - its second attempt since 2010. CBRE is the appointed marketing agent for both Villa D'Este and Cairnhill Mansions. Owners of 330-unit Eunosville near the Eunos MRT station are reviving their collective sale process and have appointed OrangeTee as the marketing agent.

Meanwhile, the collective sale committee of Rio Casa, a privatised HUDC estate with 286 units at Hougang Avenue 7, is appointing a lawyer. The sale committees for Dunearn Court, a 12-unit freehold block on Dunearn Road in prime District 11 and One Tree Hill Gardens, a 13-unit freehold project in prime District 10, are drafting the collective sale agreements. They have appointed Knight Frank as the marketing agent.

[TOKYO] Japan is not considering building new nuclear power plants to help it become carbon-free by 2050, the...

[BENGALURU] Gold prices were little changed on Wednesday, staying above the US$1,900-mark, as uncertainties about US...

THE Maritime and Port Authority of Singapore (MPA) will issue up to two additional liquefied natural gas (LNG)...