Private home prices expected to rise this year after 2.5% gain in 2019

Nisha Ramchandaninishar@sph.com.sg@Nisha_BT
Prices of private homes in Singapore are expected to rise by between 1 and 5 per cent this year, analysts say, after clocking a 2.5 per cent gain in 2019.
PHOTO: ST FILE

PRICES of private homes in Singapore are expected to rise by between 1 and 5 per cent this year, analysts say, after clocking a 2.5 per cent gain in 2019.

At 2.5 per cent, the price growth moderated from the 7.9 per cent clip in 2018, the Urban Redevelopment Authority's (URA) flash estimate showed.

For the fourth quarter of 2019, the overall price index for private homes was up 0.3 per cent - led by the landed segment - over the prior quarter, compared to 1.3 per cent in Q3 2019. This marks the third consecutive quarter in 2019 where private home prices went up.

Nicholas Mak, head of research & consultancy at ERA Realty, noted that the private residential overall price index has been gradually rising, and is now "only 0.8 per cent lower than the previous peak in Q3 2013".

Still, with prices rising by a much smaller margin in 2019 vis-a-vis 2018, Cushman & Wakefield's head of research for Singapore and South-east Asia Christine Li said: "This strengthens the notion that there is no excessive exuberance in the Singapore residential market and prices are likely to stay in line with economic fundamentals and affordability. There is thus no need for the government to intervene at this juncture, as the market is finding its own equilibrium." 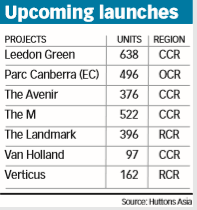 Based on the transactions during the quarter, the decline in non-landed CCR prices in the fourth quarter "could be due to projects that have been completed earlier but still have inventory", said Tricia Song, head of research (Singapore) at Colliers International. These include Marina One Residences, which sold 43 units in the quarter at a median price of S$2,242 per square foot (psf), after having moved 30 units in the preceeding quarter at a S$2,503 psf median.

In the rest of central region (RCR), prices went down by 1.4 per cent in Q4, after registering a gain of 1.3 per cent in the previous quarter. The fall could have stemmed from "the high base achieved in Q3 2019 for new launches such as Avenue South Residence, One Pearl Bank and Meyer Mansion," suggested Ms Song. No new launches took place in the RCR in Q4.

Prices of non-landed private homes in outside central region (OCR) bucked the trend by going up 2.9 per cent, compared to a 0.8 per cent increase in the preceding quarter. JLL's senior director of research & consultancy Ong Teck Hui pointed to robust pricing at certain new projects in the OCR, such as Sengkang Grand Residences, which sold 235 units at a median price of S$1,741 psf in November when it was launched.

"As prices in the OCR are the most affordable compared to other sub-markets, the price outlook for this segment remains positive," he added.

With over 50 new residential projects launched last year, OrangeTee & Tie's head of research & consultancy Christine Sun estimates that 9,500 to 10,000 new homes were sold, and that 9,000 to 9,800 new homes could be bought this year. Overall prices are likely to go up by between one and three per cent this year, she said.

"While fewer projects could be launched this year - especially mega ones with above 1,000 units - we are positive about the private residential market for 2020. We may also see more luxury home sales, as a slightly higher proportion of luxury project launches are coming this year." Such projects include The Avenir, Kopar at Newton, Van Holland and The Atelier.

Huttons Asia research director Lee Sze Teck reckons there could be nearly 50 launches this year, with 11,000 units released to the market for sale. Of these, about half are in the CCR. He said: "The sales momentum in 2019 is likely to carry forward in 2020. We could see sales volume maintain at a similar level of between 9,000 and 10,000 units in 2020."

Ms Li sees prices as "remaining sticky, with an upward bias of up to 3 per cent"; PropNex Realty's chief executive Ismail Gafoor sees overall price growth of 2-3 per cent in 2020. "As the real estate market remains resilient, developers are starting to raise the prices for unsold units," he said.

URA's flash estimates are compiled based on transaction prices given in contracts submitted for stamp duty payment and data on units sold by developers up till mid-December. The statistics will be updated on Jan 23, when URA releases its full set of real estate statistics for the fourth quarter of 2019.

[TOKYO] Japanese officials confirmed four new coronavirus infections on Saturday, as the number of cases outside of...

[SEATTLE ] Boeing Co put three employees who worked with the former chief technical pilot of the 737 Max on...

[WASHINGTON] US President Donald Trump will raise the issue of religious freedom in India during his meetings with...

For Harry and Meghan, no more 'royal' in their brand

[NEW YORK] Prince Harry and his wife, Meghan, will give up the name "royal" as they withdraw from official duties as...