Lynette Khoo
Private home prices rose 0.8 per cent in the fourth quarter from a quarter ago, bringing the full year increase to 1.1 per cent following a 3.1 per cent decline in 2016.
PHOTO: ST FILE

PRIVATE home prices rose 0.8 per cent in the fourth quarter from a quarter ago, bringing the full year increase to 1.1 per cent following a 3.1 per cent decline in 2016.

This came even as private home rents fell again in the fourth quarter, though the full-year rental decline eased on the back of improved occupancies.

These figures were released by the Urban Revelopment Authority (URA) in its fourth-quarter real estate statistics report on Friday.

The recovery was less decisive in the landed segment. Prices of landed properties rose 0.5 per cent in the fourth quarter, after a 1.2 per cent rise in the preceding quarter. For the full-year, however, landed home prices still slipped 0.5 per cent.

URA's data shows that rents of private homes fell 0.9 per cent in the fourth quarter, after being flat in the preceding quarter. For the whole of 2017, rents slipped 1.9 per cent, compared to a 4 per cent fall in 2016.

One bright data spot was seen in the vacancy rates. Despite a larger increase in completed private homes in the fourth quarter of 4,205 units (compated to 3,974 units in the third quarter), the vacancy rate for completed private homes, excluding executive condominiums (ECs), improved to 7.8 per cent at end-Q4, compared to 8.4 per cent a quarter ago.

During the fourth quarter alone, 1,864 private residential units and 446 EC units were sold. 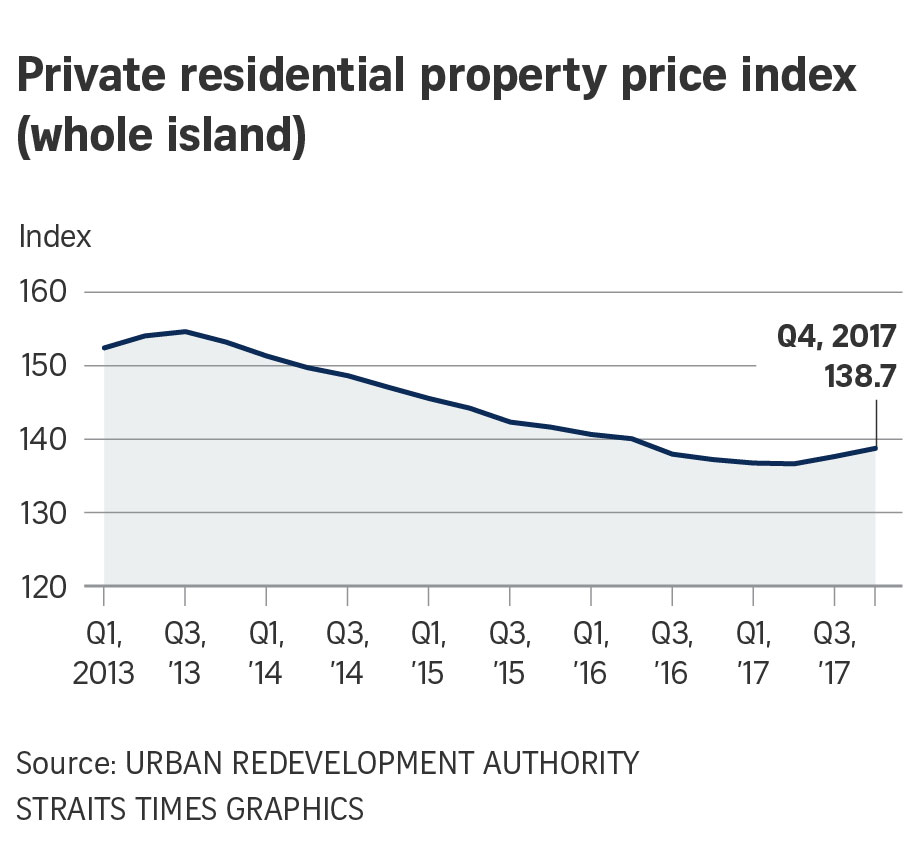 Meanwhile, near-term supply for now remains benign. There were 36,029 uncompleted private residential units (excluding ECs) in the pipeline with planning approvals as at end-2017, compared with the 35,022 units in the previous quarter. Of this, 18,891 units remained unsold, up from 16,031 units in the third quarter.

There were another 6,144 uncompleted EC units with planning approvals as at end-2017, of which 864 units remained unsold.

At the same time, the completion of new homes is tapering off. Some 14,764 private homes and ECs will be completed this year, while another 8,760 next year. These are significantly lower than the completion of 20,568 private units and ECs last year.

But URA pointed out that in addition to the 19,755 unsold uncompleted units with planning approval as at end-2017, there is a potential supply of 19,900 units from land sale sites that have not been granted planning approvals yet.

These include about 12,100 units from en-bloc sale sites sold up to mid-January 2018, as well as the 7,800 units from awarded government land sales (GLS) sites, sites on the GLS Reserve List that have been triggered for sale but not awarded yet, and GLS Confirmed List sites that have not been awarded yet.

"A large part of this new supply of 19,900 units could be made available for sale later this year or next year, and will be completed from 2021 onwards," URA said.

Yanlord records 29.8b yuan in property pre-sales for first six months of 2020

[NEW YORK] Walt Disney's new Disney+ streaming app was downloaded more than half a million times over the weekend...

[GENEVA] The World Health Organisation (WHO) is reviewing a report that suggested its advice on the novel...

[HONG KONG] Hong Kong's government on Monday ordered schools to review and remove any books that might breach a...

THE Government Technology Agency of Singapore (GovTech) and analytics...