Analysts say bonanza is a one-off, with sales moderating for rest of year
Kalpana Rashiwalakalpana@sph.com.sg@KalpanaBT
The knee-jerk reaction by some buyers who raced to snap up private residential properties on the night of July 5 to beat the cooling measures that kicked in the next day sent developers' sales for July to its highest level in 16 months.
BT PHOTO: KUA CHEE SIONG

THE knee-jerk reaction by some buyers who raced to snap up private residential properties on the night of July 5 to beat the cooling measures that kicked in the next day sent developers' sales for July to its highest level in 16 months.

However, no one is expecting a repeat performance this month, given the double whammy from the cooling measures - higher additional buyer's stamp duties and lower loan-to-value limits - as well as the ongoing Hungry Ghost festival, when some buyers avoid buying property.

Among the projects launched so far this month, The Tre Ver in Potong Pasir has done relatively well; it has sold 148 units at an average price of around S$1,550 psf, which is deemed "reasonable" for the area.

How things pan out when the Hungry Ghost month ends in September will depend on market sentiment, developers' strategies and how far they are willing to take a hit on prices.

Given that developers' sales volume in July is an aberration, JLL national director of research and consultancy Ong Teck Hui expects moderated monthly sales figures for the rest of the year, taking into account the more cautious mood. "That said, projects that are priced realistically will fare better."

PropNex Realty chief executive Ismail Gafoor said 15 to 20 launches are expected for the rest of the year.

A developer said: "We do not have the luxury of holding back our launches for too long - because of deadlines stipulated to finish selling our projects. We have to launch, but it is a matter of pricing." 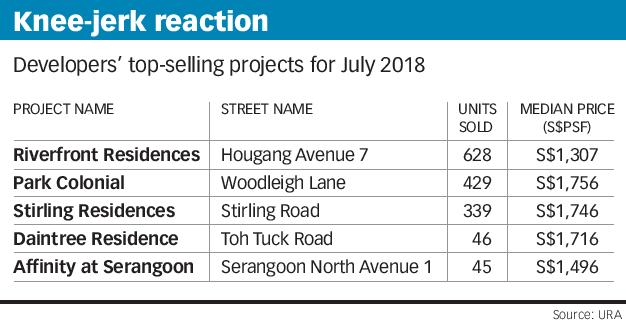 As expected, the top three selling projects in July were Riverfront Residences in Hougang, Park Colonial next to Woodleigh MRT station and Stirling Residences near Queenstown MRT station.

Their respective developers began sales on the evening of July 5. Together, the three projects accounted for 1,396 units, or just over 80 per cent of developers' sales of private homes last month, according to data released by the Urban Redevelopment Authority, based on its survey of licensed housing developers.

CBRE head of research for Singapore and South-East Asia, Desmond Sim, said that about 60 per cent of the total private homes developers sold last month - were snapped up on July 5.

That said, others pointed out that it was also no mean feat for developers to have pushed well over 600 units between July 6 and month's end, after the latest cooling measures took effect. 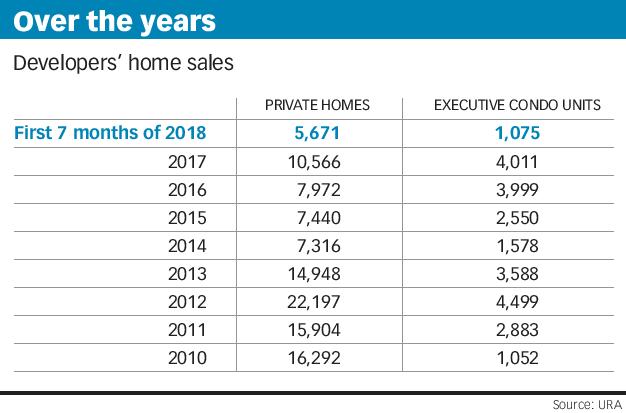 Mr Ismail said the sales momentum for the July 6 to 31 period carried through at the three top-selling projects, which were "sensitively priced". At other developments released earlier, developers lowered their prices to entice buyers to commit.

Analysts argue that there is still fundamental demand for private homes from owner-occupiers, be they first-time buyers or upgraders. It is the investor segment that has been hit harder by the measures.

This is reflected in a shift in buyer preferences towards bigger units after the cooling measures took effect, going by OrangeTee & Tie's analysis.

In the first seven months of this year, developers sold 5,671 private homes, down about 21 per cent from the 7,151 units in the same period last year.

Property consultants expect the full-year figure to be less than the 10,566 units for 2017.

ERA Realty Network key executive officer Eugene Lim said: "While most buyers can still afford to buy, there is no longer a 'feel-good' factor."

ZACD Group executive director Nicholas Mak predicts that developers' sales volumes will pick up after the Hungry Ghost month, but is unlikely to return to the levels before July 5.

"Although home-buyers' purchasing power will be affected by the new market curbs, most developers have indicated that they are unlikely to cut prices significantly at this moment because a majority of the development costs of their projects are already locked in.

"On the other hand, most homebuyers would want lower prices to help them with the higher stamp duties and equity required. Such a mismatch in expectations might lead to lower developers' sales volumes in the next few months."

According to ERA, showflats for several projects are targeting to open for preview next month: including Jadescape on the former Shunfu Ville site in Marymount area, Jui Residences by Selangor Dredging Bhd in Serangoon Road and Arena Residences in Guillemard Lane.

ERA's Mr Lim said: "Despite these launches, buying demand is not expected to increase significantly as buyers evaluate their housing needs, options and finances."

Colliers International head of research for Singapore Tricia Song is not ruling out the possibility of some developers potentially delaying launches as they reassess the market and re-strategise post-cooling measures.

URA's data released on Wednesday also show that developers sold 52 executive condominium (EC units) last month, the same as in the previous month. In July 2017, they had moved 980 units. ECs are a public-private housing hybrid; the segment is now undergoing a supply crunch, with no new launches expected until the second half of next year.

[NEW YORK] Wall Street surged at the open on Monday following the longest weekly losing streak in a year for the S...

Rio Tinto changes tack, ready for talks over Bougainville mine

[MELBOURNE] Rio Tinto said on Tuesday that it was ready to talk to stakeholders over allegations of human rights...

[BENGALURU] Abbott Laboratories' said on Monday it had received clearance to market the smallest version of its...

15 new Covid-19 cases in Singapore, with two in the community