Kalpana Rashiwalakalpana@sph.com.sg@KalpanaBT
Two straight quarters of increases in the overall private home price index of the Urban Redevelopment Authority (URA) have sparked a debate on whether this might prompt the authorities to respond with more measures to cool down the property market.
PHOTO: ST FILE

TWO straight quarters of increases in the overall private home price index of the Urban Redevelopment Authority (URA) have sparked a debate on whether this might prompt the authorities to respond with more measures to cool down the property market.

Barclays' regional economist Brian Tan thinks the risk of more cooling measures has risen to "a relatively high level", and that the government could act quickly.

He said the continued rise in the private home price index suggests that its surprising jump in the second quarter did not come from a distortion or measurement error.

"Instead, it may reflect an ongoing improvement in market sentiment. We believe the government would view this as out of sync with the darkening economic outlook; the Ministry of Trade and Industry has downgraded the official GDP growth forecast range for the second time this year to 0-1 per cent, from 1.5-2.5 per cent, with its base case for around 0.5 per cent."

But other property market watchers beg to differ. Tricia Song, head of research for Singapore at Colliers International, for example, pointed out that the pace of increase in the URA's index has slowed.

The URA's flash estimate for the third quarter indicates that private home prices rose 0.9 per cent over the quarter before. This followed the 1.5 per cent quarter-on-quarter increase in Q2, which some property consultants had termed a "blip".

Some property consultants expect the URA's price index to post a full-year increase of between 2 and 2.5 per cent. 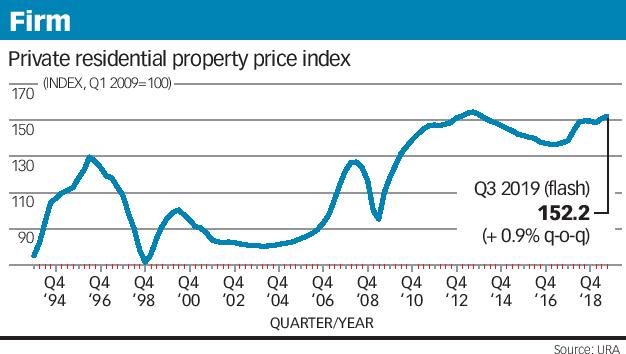 Despite this mild price appreciation contrasting with the official forecast of weak growth in Singapore's GDP this year, JLL senior director of research and consultancy Ong Teck Hui argues that there is "no cogent justification for considering additional cooling measures at this juncture".

It is unrealistic to align changes in home prices with GDP growth so closely, he said. "There should be some leeway in the price-fundamentals differential.

"There should not be any grave concern if the economy is flat and home prices are mildly higher, unless prices show signs of a robust upward momentum. Private home prices in Q3 are a touch lower than Q3 2013, but GDP growth in the last five years averaged 3.3 per cent per annum on a compounded basis."

Looked at from this perspective, home prices have underperformed fundamentals, he added.

Some property consultants attribute the increase in private home prices to the high land prices developers paid in 2017 and in the first half of 2018; the land-buying binge ended with the rollout of cooling measures in early July 2018.

Putting things in perspective, however, Mr Ong said it does not necessarily follow that land prices and end-unit selling prices have to move in tandem. End-unit prices are a function of supply and demand.

What has contributed to the price increase is that in general,

demand for non-landed homes has been steady, with developers continuing to launch new projects at firm prices.

In the suburbs or Outside Central Region (OCR), demand has been mostly firm because of affordability. "Launch prices at about S$1,300 to S$1,400 per sq ft (psf) entry-level pricing is within the affordability of many upgrader households in the suburbs," said Mr Ong.

In the high-end segment, a key factor fuelling a revival is the availability of new, quality projects for the well-heeled. Besides the new launch of Haus on Handy in the Dhoby Ghaut area, other developments with significant sales contribution in Q3 include Marina One Residences, Martin Modern, 8 Saint Thomas, Nouvel 18, Boulevard 88 and 3 Cuscaden, which had median prices at between S$2,462 psf and S$3,749 psf, JLL's analysis showed.

The URA said that prices of non-landed private homes rose 1.7 per cent quarter on quarter in Q3, after having risen 2 per cent in the previous quarter.

Giving a breakdown by region, the URA said prices of non-landed private homes in the prime areas or core central region (CCR) rose 2.9 per cent quarter on quarter, compared with the 2.3 per cent gain in the previous quarter.

Prices in the fringe areas or rest of central region (RCR) climbed 1.6 per cent, after having posted an increase of 3.5 per cent in the previous quarter.

In OCR, prices rose 0.7 per cent, following the 0.4 per cent increase in the previous quarter.

OrangeTee & Tie's head of research and consultancy Christine Sun expects the total number of private homes (excluding executive condominium or EC units) sold in Q3 to surpass the 4,766 in Q2, albeit lower than the 5,765 in Q3 2018.

Knight Frank Singapore research head Lee Nai Jia said the second consecutive quarterly increases in both sales volume and prices suggest that more buyers previously on the sidelines are coming back to the market. "The uncertain economic outlook may lead more investors to buy residential properties, an asset deemed safer than equities, but with more upside than government bonds."

Cushman & Wakefield's head of research for Singapore and South-east Asia Christine Li commented: "Singapore seems to have benefited from the diversion of investments in the high-end residential market - against the US-China trade tussle.

Property consultants say there is still some headroom for prices to rise, although at a slower clip. "The underlying demand for homes remains resilient and will continue to support sales and prices in coming months. The more benign interest rate environment is also favourable for the housing market," said Ms Song.

CBRE's head of research for Southeast Asia Desmond Sim said the roughly 9,000 private homes (excluding ECs) developers are expected to sell this year - despite cooling measures - reflects relatively healthy demand. "However, this will be outpaced by the number of launches. In the year to date, we have already seen more than 50 residential launches."

JLL's Mr Ong said that while threats from the economic slowdown and oversupply remain, downside to prices appears limited, unless a major crisis occurs. "HDB resale prices were on the mend in Q3, as reflected by the 0.1 per cent rise from the flash estimate. This could provide further support for the private housing market, especially from HDB upgraders."