[NEW YORK] The Dow shot above 25,000 points for the first time on Thursday as strong US private-sector hiring data extended a stocks rally already boosted by the recent US tax reform.

The blue-chip index hit the landmark within minutes of the opening bell and pushed higher from there before leveling off. Near 1645 GMT, the Dow Jones Industrial Average stood at 25,045.86 up 0.5 per cent from Wednesday's close.

Adding to the optimism about tax reform was the better-than-expected economic data, after payroll firm ADP reported that private employers added 250,000 jobs last month, well above the 190,000 that had been expected by analysts.

The data come ahead of the more closely scrutinised government jobs report Friday.

"Yesterday's PMIs came from all over the world, and they are up everywhere," said Maris Ogg, a founding principal at Tower Bridge Advisors. "The path of least resistance is still up."

The Dow's push above 25,000 is another landmark for the index amid a multi-year bull market since the depths of the Great Recession that followed the 2008 financial crisis.

The latest push higher comes as US unemployment and consumer confidence linger at or near multi-year high levels, and as US tax cuts have led analysts to boost corporate earnings estimates.

Market watchers vary on where they see stocks going from here, with some forecasters expecting the positive momentum to continue throughout the year and others anticipating greater volatility.

Key hurdles that could derail the surge in equities include the possibility of more aggressive than expected tightening of monetary policy by the Federal Reserve and other global central banks, as well as fears the Trump administration's tough posture with international commercial parties could lead to a trade war.

But Ms Ogg senses greater confidence among clients as they grow accustomed to the Trump presidency.

"Last year at this time, I was calls from clients saying 'You've got to get me out of this. I am really nervous he'll take us to war,'" she said. "I am getting less of that." Still, stock valuations relative to earnings, although not at all-time peaks, are on the "upper range" of normal levels, she said.

Earlier this week he projected the S&P 500 would end the year at 2,800, which implies a large portion of the year's gains have already happened.

"I feel like a dieter with a calorie allotment who has already gone through half or three-quarters of that by 9am," Mr Stovall quipped on CNBC Thursday. 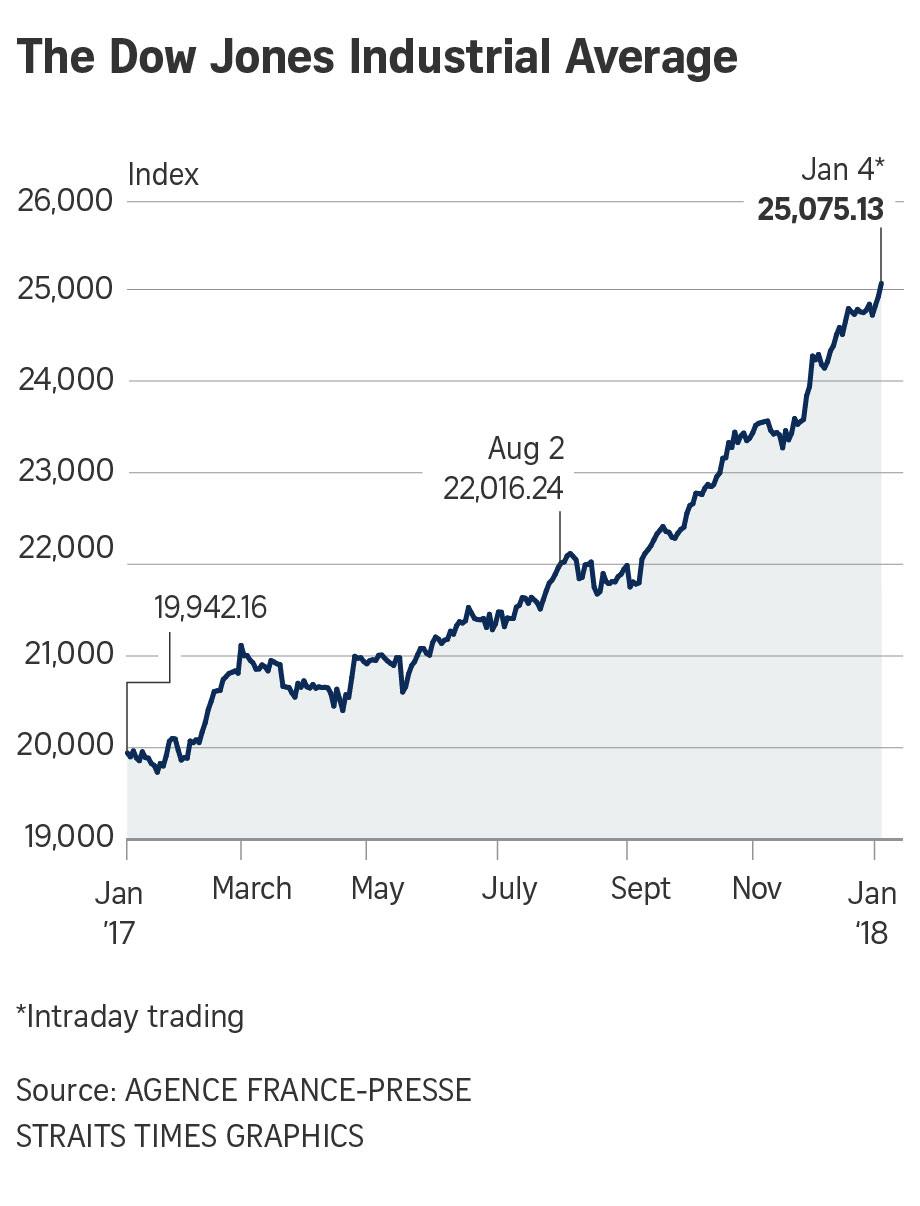 Other Dow leaders included IBM and General Electric, companies that have underperformed the broader market in recent years.

They were offset somewhat by Intel, which slumped 3.1 per cent amid questions over a defect in computer chips that could render sensitive data vulnerable to hackers.

Retailers also were under pressure following holiday performance updates by department stores showing sales improved, but perhaps not as much as hoped.

Tesla Motors dipped 0.1 per cent after again pushing back its time-frame for ramping up output on the closely-watched Model 3 vehicle.

The electric carmaker said it now expects to hit a production level of 5,000 a week by the end of the second quarter instead of at the end of the first quarter.

Facebook gets reprieve from Apple on live events cut

[SAN FRANCISCO] Facebook said on Friday that it had struck a deal in which Apple agreed to temporarily forgo its cut...

[TOKYO] Japan is "determined" to host the postponed Olympic Games in 2021 despite the coronavirus pandemic, the...

UK pledges over 340 million pounds for WHO, calls for end to 'ugly rifts'

[LONDON] British Prime Minister Boris Johnson will pledge on Saturday a 30 per cent increase in funding for the...