US: Stocks drop more than 4%, extending rout amid coronavirus fears

Wall Street stocks were pummeled again on Thursday as the further spread of the coronavirus exacerbated fears of a global slowdown and raised the risk of a US recession.
PHOTO: REUTERS

[NEW YORK] Wall Street stocks were pummeled again on Thursday as the further spread of the coronavirus exacerbated fears of a global slowdown and raised the risk of a US recession.

The losses set Wall Street on pace for its worst week since the 2008 financial crisis, as investors continued to flee equities into safer investments like US Treasuries and gold.

The virus has now spread to 50 countries, with cases confirmed in the last day in the United States and Spain that appeared to be contracted locally.

Maybank Singapore to give S$1,400 to staff affected by Malaysia lockdown 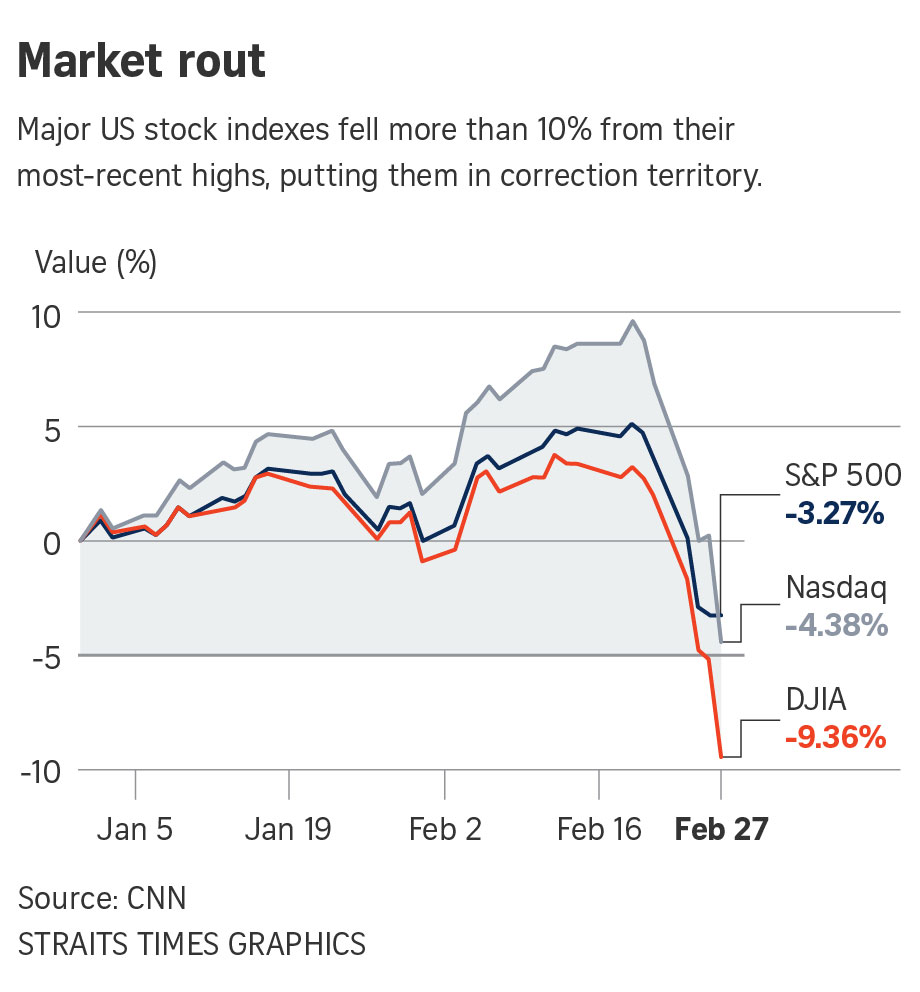 Maris Ogg of Tower Bridge Advisors said there were still too many unknowns about the scale of the global outbreak and that "we're not going to know the answer for a while, probably at least two to four weeks."

The market's losses have been exacerbated in the US by the lofty valuations that lifted indices to a series of records only weeks ago.

"It's understandable that not only do you have something to worry about, which we haven't had for a while, but we're also due for a correction," Ms Ogg said.

The Dow was a sea of red, with 3M the only gainer due to robust demand for face masks to guard against the virus.

Other large companies, including Apple, Boeing, Microsoft and Procter & Gamble lost more than five per cent.

Markets have been rattled by the prospect that lockdown measures such as those employed in China will become more widespread, denting global growth and producing a "nesting" impulse in the consumer-driven US economy, especially coming at a time when many economies already are fragile.

Goldman Sachs was the latest to issue a warning on Thursday when it slashed its 2020 forecast for US earnings, estimating that it now expects flat earnings in 2020 and lower growth in 2021.

"Our reduced forecasts reflect the severe decline in Chinese economic activity in (the first quarter), lower end-demand for US exporters, supply chain disruption, a slowdown in US economic activity, and elevated uncertainty," Goldman said.

Maybank Singapore to give S$1,400 to staff affected by Malaysia lockdown

MAYBANK Singapore will pay a one-time financial assistance of S$1,400 to employees who are living in Singapore...

[BEIJING] China's ports and shipping firms are bracing for a second wave of supply chain disruptions that may be...

[SYDNEY] Australia's retailers are putting limits on purchases of alcohol as hoarders turn their attention from...

Meal kits are the next best thing in Covid-19 pandemic

[LONDON] A whole generation of tech startups was built on the premise that the most lucrative business model aim to...