Apple on Thursday reported a US$20 billion profit in a record-setting quarter and said sales of its newest iPhone X smartphone were better than expected.
PHOTO: REUTERS

[SAN FRANCISCO] Apple on Thursday reported a US$20 billion profit in a record-setting quarter and said sales of its newest iPhone X smartphone were better than expected.

Revenue in the final three months of last year increased 13 per cent to US$88.3 billion, according to the California-based technology giant.

"We're thrilled to report the biggest quarter in Apple's history, with broad-based growth that included the highest revenue ever from a new iPhone lineup," said Apple chief executive Tim Cook.

"iPhone X surpassed our expectations and has been our top-selling iPhone every week since it shipped in November."

However, Apple reported that overall iPhone sales in the quarter 77.3 million from were about a million fewer than the same period a year earlier. But iPhone revenues rose 13 per cent from a year ago, suggesting its newer models were gaining traction.

The earnings come amid concerns over weak demand for the newest and most expensive iPhone X, the 10th anniversary edition of the iconic smartphone.

Apple also forecast that revenue in the current quarter would be between US$60 billion and US$62 billion in an outlook less rosy than analysts had expected.

Apple shares dipped and then rose two per cent to US$171.08 in after-market trades that followed release of the earnings figures.

Despite Apple's spectacular trajectory in the decade since the introduction of the iPhone, the California technology titan is facing challenges on whether it can continue growth. 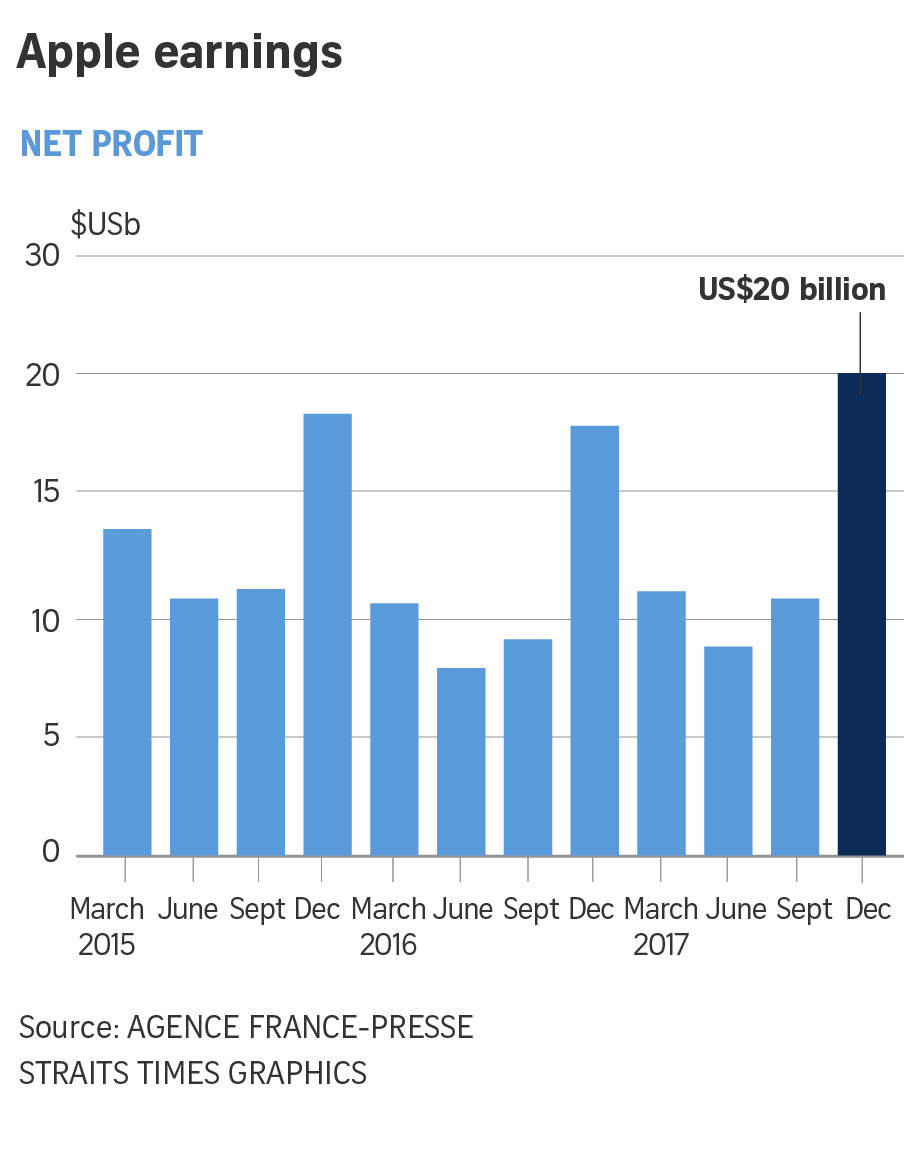 Apple's image meanwhile has been bruised by revelations that the company updated its mobile software to slow the performance of old iPhones as batteries weaken from age.

The latest earnings report showed gains for Apple in all its regions including "Greater China," where it has faced challenges.

While the iPhone delivered the bulk of its revenues at US$61.6 billion in the quarter, the key segment of services saw revenue growth of 18 per cent to US$8.5 billion and "other product" which include the Apple Watch and Apple TV, increased 36 per cent to US$5.5 billion.

Apple said its cash pile grew to US$285 billion, which much of that stashed overseas.

The company said last month it would bring back most of its profits from abroad to take advantage of a favorable tax rate in legislation approved by Congress last year.

The repatriation will result in a tax bill of some US$38 billion, but also would free up big chunks of money for investment.

For the latest quarter - the fiscal first quarter for the three months to December 30 - Apple set aside US$6.97 billion for taxes.

Huawei's Chinese mobile rivals looking to capitalise on its US woes

[NEW YORK] General Motors withdrew on Monday from a challenge to California's fuel economy rules that had been...

[LONDON] British Prime Minister Boris Johnson on Monday said the "escape route" from the coronavirus was in sight as...

US business leaders move on from Trump to Biden

[NEW YORK] US President Donald Trump may still be trying to overturn Joe Biden's election win, but the business...

[PARIS] French users of a Muslim prayer app accused of selling data that ended up with the US army are suing the...