Airbus will cut production rates for its A380 superjumbo and A400M military aircraft, it confirmed on Wednesday, adding that up to 3,700 jobs would be hit in France, Germany, Britain and Spain.
PHOTO: AFP

[PARIS] Airbus will cut production rates for its A380 superjumbo and A400M military aircraft, it confirmed on Wednesday, adding that up to 3,700 jobs would be hit in France, Germany, Britain and Spain.

Dubai's Emirates saved the A380, the world's largest passenger jet, from death row in January with an order worth US$16 billion at list prices. But demand elsewhere remains weak and Airbus said it would fall to six A380 deliveries a year by 2020, from an expected 12 deliveries this year.

In a sign of the challenges Airbus faces with the 544-seat A380, Qatar Airways CEO Akbar al-Baker said the planemaker needed to improve the double-decker jet's fuel efficiency before it would look at another order.

The A400M programme, meanwhile, has been beset by glitches and cost overruns. Deliveries of the new troop transporter will slow to eight in 2020, compared with 15 this year and 11 in 2019.

Airbus has presented the adjustments to its European Works Council and will now enter formal negotiations with staff representatives at European and national levels, the company said in a statement.

"About 10 sites will be impacted in Europe. Most workers will be redeployed," an Airbus spokesman said.

Trade unionists present at the meeting said that Britain's Filton site, Spain's factory in Sevilla and plants in Germany's Bremen and Augsburg would be the main ones affected.

Yvonnick Dreno, a senior Force Ouvriere unionist said that 1,925 jobs would be affected in Germany, 860 in Spain, 465 in Britain and 470 in France.

"We believe the redeployment to other programmes will be relatively easy in France," he told Reuters, adding that reassigning workers would be harder in Spain and Britain, where production is more focused on the A400M.

Emirates' order for 20 of the double-decker A380s, with an option of 16 more, rescued the slow-selling aircraft, in service for only 10 years and one of Europe's most visible industrial symbols overseas.

At a delivery rate of six a year, the A380 programme will make a loss. Airbus hopes the Emirates agreement will spur orders from other airlines, but some will be hard to win over. 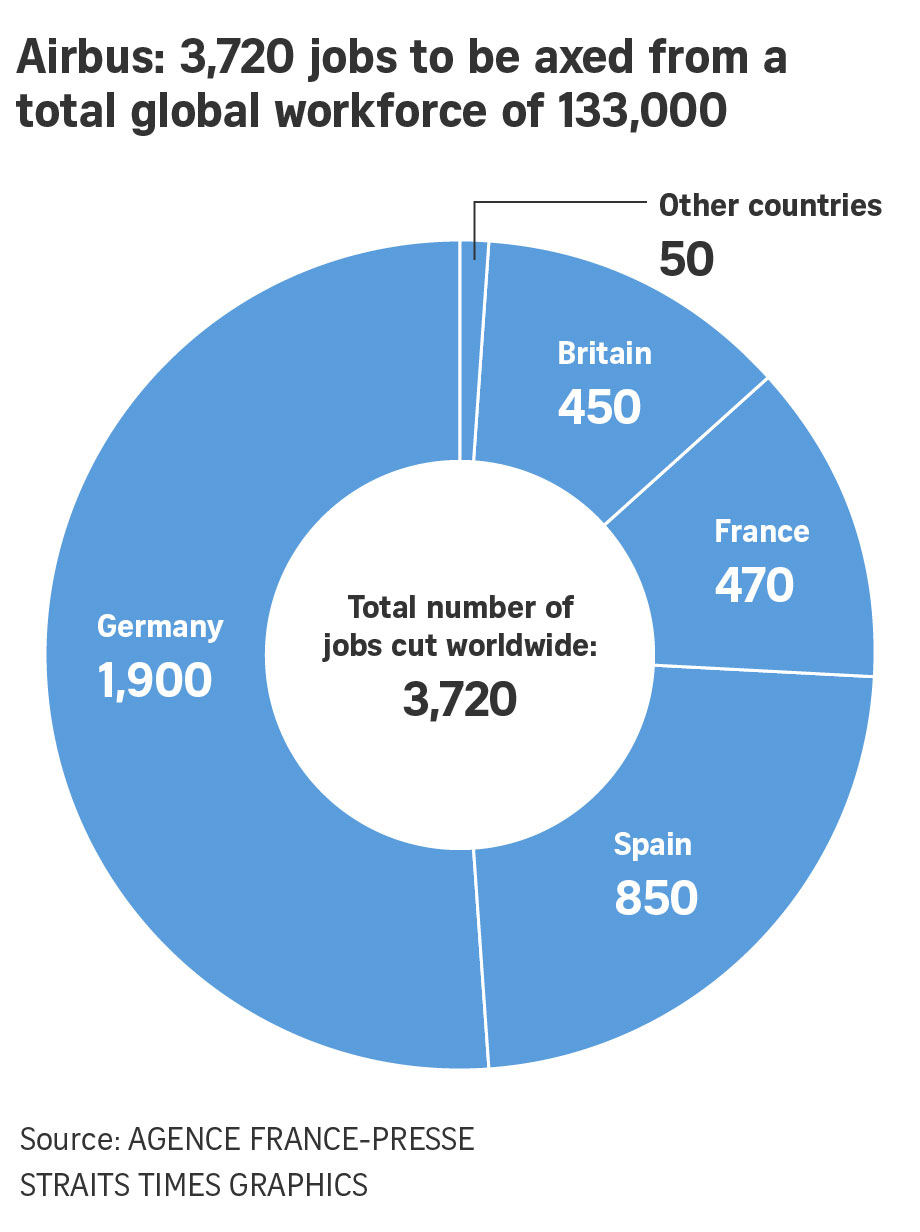 "In the current form we are not interested in any more A380s," Qatar Airways boss Baker told reporters in Berlin. "It is very heavy. It needs a lot of modifications. It needs a lot of improvement in its fuel burn to make it economic."

IAG, which operates British Airways, Iberia, Vueling and Aer Lingus, said on Tuesday that it would consider buying more A380s if the aircraft was cheaper.

Sales of the A380 have disappointed in the face of strong competition from smaller, more flexible twin-engine jets that are at least as efficient.

Airbus struck a draft deal last month with European buyer nations of the A400M - Europe's largest defence project - to revamp delivery schedules and ease cash retention clauses but was forced to write off another 1.3 billion euros on the loss-making project.

Korean Air crewmember who was on flights to LA tests positive for coronavirus: reports

[LONDON] Britain put the prospect of a chaotic Brexit back on the table on Thursday as it set out its red lines for...

[GENEVA] The new coronavirus outbreak has reached a "decisive point", the head of the World Health Organisation (WHO...