SEMBCORP Industries (Sembcorp) and Sembcorp Marine (Sembmarine) have proposed a major plan to rescue the marine giant with a S$2.1 billion cash call and to "demerge" from each other as the pandemic takes a toll on operations.

The plan will strengthen both companies' financial positions and unlock shareholder value and is in the best interests of their respective shareholders, said the companies in a joint statement issued on Monday.

Sembmarine hopes to raise S$2.1 billion under a five-for-one renounceable rights issue at an issue price of 20 Singapore cents per share. Of that, Sembcorp has irrevocably undertaken to subscribe for S$1.27 billion (its pro-rata entitlement) plus take up an additional S$230 million, if necessary – a total commitment of up to S$1.5 billion.

Sembcorp said it plans to do this by setting off a S$1.5 billion subordinated loan that it had extended to Sembmarine in June 2019. Temasek Holdings has agreed to sub-underwrite the remaining S$600 million of the rights issue.

The proposed demerger will be done through a distribution in specie of Sembcorp’s stake in the recapitalised Sembmarine to Sembcorp shareholders as dividends. Shareholders of Sembcorp are set to receive between 427 and 491 Sembmarine shares for every 100 Sembcorp  shares without any cash outlay. 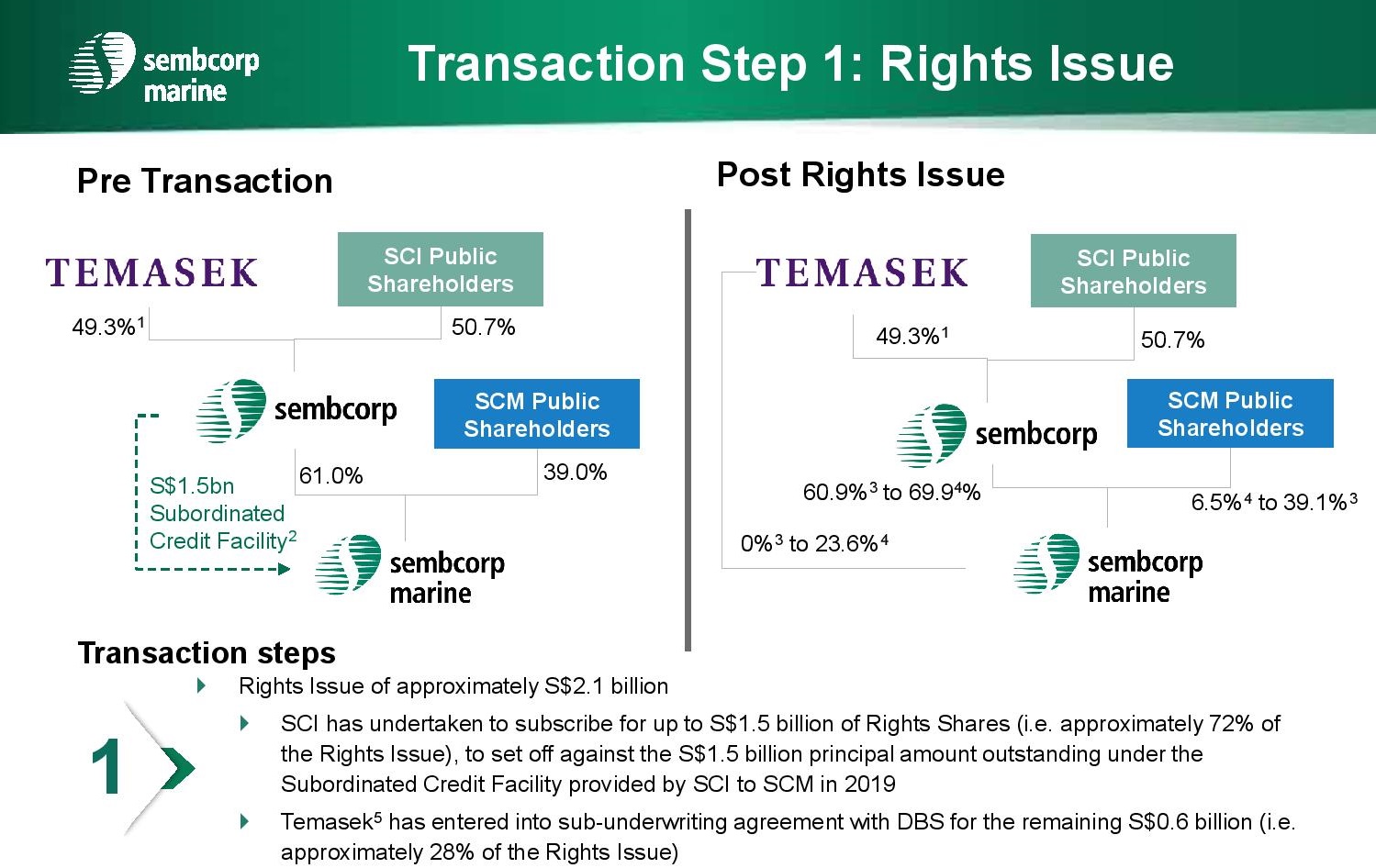 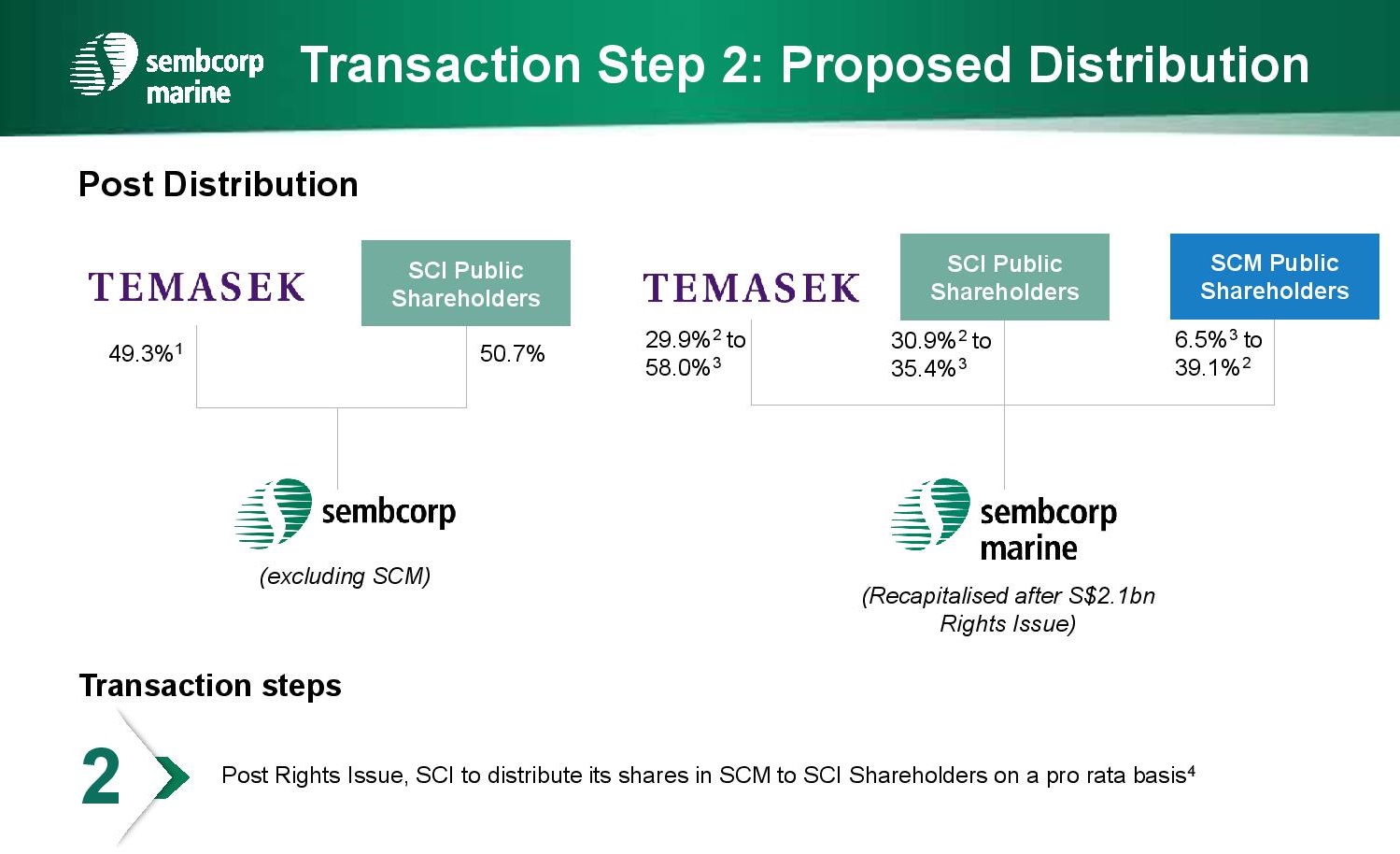 Upon completion of the proposed transaction, Temasek will be a direct and significant shareholder of both firms, owning some 49.3 per cent of Sembcorp and more than 29 per cent of Sembmarine.

In a joint statement, the companies said the proposed transaction will enable them to "better focus on their respective industries".

"With greater flexibility following the demerger, both companies can pursue their own sustainable growth paths on the back of changes to their industries in recent years," they said.

Sembcorp will continue to be focused on the core segments of energy and urban development while Sembmarine will build on its core engineering solutions for the offshore, marine and energy industries.

Sembmarine, which has suffered a blow from the Covid-19 pandemic and oil crash, will also be able to better address its urgent need to recapitalise, meet liquidity requirements, and strengthen its balance sheet to ride through the prolonged downturn in the offshore and marine industry.

"We believe that the rights issue will give us much needed financial strength to ride through the prolonged industry downturn and prepare for recovery," said Sembmarine president and chief executive Wong Weng Sun.

Sembcorp group president and chief executive officer Neil McGregor said: "The proposed demerger will unlock shareholder value by transforming Sembcorp Industries into a focused business that can compete and capture growth opportunities in the energy and urban sectors. In addition, our shareholders will also receive value in the form of shares in a stronger recapitalised Sembcorp Marine through the proposed distribution in specie."