SINGAPORE Exchange (SGX) is coughing out 186 million euros in cash (S$280 million) for a 93 per cent stake in Scientific Beta Pte Ltd, a smart beta index firm, as the bourse looks to accelerate its data, connectivity and indices (DCI) business.

The strategic investment - which will be funded through external borrowings in euros - is expected to strengthen SGX's research-based index design capabilities as well as broaden its range of index products and clientele.

An estimated US$55 billion in assets owned by global institutions tracked Scientific Beta's indices as of end September 2019. This has risen more than 10 times in four years, on the back of significant growth in factor investing - an investment approach that involves targeting specific drivers of return across asset classes to help improve portfolio outcomes, reduce volatility and enhance diversification.

Unlike a market-cap weighted benchmark index, smart beta offers a very broad range of categorisation, from liquidity to fundamentals and profitability to dividend yield and even metrics based on Environmental, Social, and Governance (ESG).

Assets using factor-based strategies are forecast to reach US$2.7 trillion this year, reflecting a compound annual growth rate of 17 per cent between 2011 and 2020, according to Blackrock, a pioneer in factor investing, having launched the first factor fund in 1971.

Based on its results for its fiscal second quarter ended Dec 31, 2019, DCI accounts for S$27 million, or 12 per cent, of SGX's total revenues of S$231 million. The latest acquisition is expected to be earning per share (EPS) accretive from FY2021.

SGX's chief executive officer, Loh Boon Chye, said Scientific Beta is profitable and has a revenue of more than 20 million euros. Unlike rival index firms, it boasts of a highly-regarded research pedigree in the rapidly growing smart beta space, along with a strong suite of high profile clients in the US and Europe. 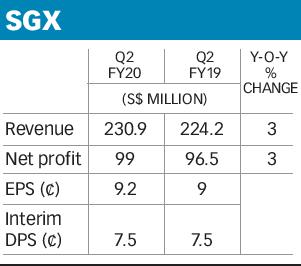 Scientific Beta is established by EDHEC-Risk Institute (ERI Asia), an affiliate of EDHEC Business School. It is an independent index provider specialising in smart beta strategies, and boasts of having more than 60 asset owners and asset managers using Scientific Beta's indices to track or benchmark their smart beta investments.

The Singapore holding of the EDHEC Endowment Fund (SHEEF), which is owned by the endowment fund established by EDHEC Business School and its alumni, will own a seven per cent stake in Scientific Beta and retain a board seat at Scientific Beta after SGX's acquisition.

On Thursday, SGX also reported Q2 FY2020 net profit of S$99.0 million, up three per cent from S$96.5 million a year ago. Revenue stood at S$230.9 million, versus S$224.2 million previously. This was the highest Q2 net profit and revenue in the last five years.

Earnings before interest, tax, depreciation and amortisation (Ebitda) came in at S$141.5 million compared with S$128.8 million. The Board of Directors has declared an interim dividend of 7.5 cents per share, unchanged from a year ago, payable on Feb 10, 2020.

The past quarter saw an easing in investor's concerns surrounding the US-China trade tensions and rising interest rates, compared to a year ago. There was lower volatility in the underlying Asian equities market and investor's confidence in cash equities market improved following signs of a trade war truce between US and China.

Mr Loh added that the exchange is seeing "higher overnight trading from our US and European customers as well as stronger interest across multiple products".

FICC revenue -- comprising fixed income as well as currencies and commodities derivatives revenues - rose 20 per cent on year to S$39.0 million, accounting for 17 per cent of total revenue, up from 15 per cent previously.

Number of new bond listings improved to 315, from 306 a year ago, raising close to S$133 billion, seven per cent more than a year ago. Currencies volume rose 13 per cent to 5.8 million contracts. Overnight T+1 volume increased nine per cent, contributing to about 30 per cent of total currency volumes. Iron ore volumes rose five per cent on year to 4.1 million contracts.

Equities revenue, comprising revenues from equities cash and equities derivatives, was comparable at S$165.3 million, accounting for 72 per cent of total revenue.

Equities-derivatives volume declined 18 per cent on year to 41 million contracts. However, the traded value on its cash equity business rose by nine per cent to S$68.2 billion.

[LONDON] European stock markets sank at the start of trade on Monday, with the heaviest falls in Italy as alarm...

[GENEVA] The World Health Organization (WHO) no longer has a process for declaring a pandemic, but the Covid-19...

[KABUL] Afghanistan on Monday identified the country's first case of coronavirus as reported cases outside China...

[LONDON] Primark owner Associated British Foods warned on Monday there was a risk of supply shortages on some lines...