Ucare.ai's systems can predict if you have Covid-19

It can also alert people before they fall ill, and how much hospital bills might total up.
Olivia Poholiviapoh@sph.com.sg@OliviaPohBT
Mr Liu says the medtech startup's software uses artificial intelligence and data analytics to predict patients' medical bills and potential illnesses in advance.
PHOTO: UCARE.AI
Ms Teo says that accuracy is key for firms in this area, even more so than being a first-mover.
PHOTO: UCARE.AI

IF ALGORITHMS can be used to predict the types of shows that someone enjoys, or the gadgets consumers buy, could it also alert people before they get sick and even how much their hospital bills might be?

Homegrown medtech startup Ucare.ai has come up with a system that can do just that.

On top of that, in recent months, co-founders Christina Teo and Neal Liu have built another model with the same risk algorithms, to predict if a person is at a higher risk of Covid-19 infection.

The program - which Ms Teo said has already reduced swab test costs for its clients by more than half and increased testing capacity by more than five times - groups those tested into different risk categories based on factors such as their health, social patterns, and occupations.

Each group has an average of five people, and all swabs from the group will be pooled for a single Polymerase Chain Reaction test.

The algorithm also identifies which individuals are most susceptible, for further tests to be conducted separately. It has a specificity rate of over 96 per cent, according to Ms Teo.

This year, the startup has also clinched a "multi-million dollar deal", to develop a claims analytics system for the Ministry of Health.

This project will use Ucare.ai's machine learning systems to detect over-servicing, over-charging, fraud as well as possible abuse cases in outlier medical claims.

Encouraged by the uptick in demand for its products, Ucare.ai is now on the offensive and looking to expand overseas and strengthen its team. There are plans to raise a series B funding round next year, said Ms Teo.

Its latest valuation - from a series A round in mid-2018 - stands around US$43.5 million, according to venture investment database VentureCap Insights.

Enterprises, hospitals or governments can "plug and play" the medtech startup's software into their existing systems, which uses artificial intelligence and data analytics to predict patients' medical bills and potential illnesses in advance; among other things, said Mr Liu, Ucare.ai's chief technology officer.

The platform does this by aggregating the data points it has in its system - such as claims data from insurers and governments, how much operations cost and how complications affect costs -to analyse and predict outcomes based on a patient's profile.

This way, patients might get less of a bill shock after seeing an accurate estimate for their medical treatment, and a hospital can offer guaranteed fixed prices for certain medical procedures, added Ms Teo, the chief executive officer of Ucare.ai.

"It is less likely that there will be a dispute, with greater cost transparency and bill certainty," she added.

The platform is also able to identify points along a patient's life where he can take steps to prevent a disease or manage a chronic illness better, said Mr Liu.

"There are interventive measures that can be taken, and by knowing when an illness might occur for certain profiles, it offers some insight for stakeholders to help prevent a hospitalisation, or improve a patient's chances," he said.

As such, accuracy is key for firms in the space, even more so than being a first-mover, said Ms Teo.

"Unlike many other industries, being the first mover in this space might not give much of a competitive advantage, especially if data is not available and accessible information is not sufficient to yield accurate results," said Ms Teo, who is also the former CEO of businessman Peter Lim's investment unit Catpital.

"We need to look for the right timing, the right place, and the right people," said Ms Teo.

The medtech startup collaborates closely with its clients and partners - such as Parkway Hospitals Singapore, the National University Hospital, the Infocomm Media Development Authority (IMDA), and the Agency for Science, Technology and Research - to collect data (with consent) and improve the accuracy for their models, said Mr Liu.

When asked about the safeguards the startup implements to secure data, he said that it implements two core principles to guide its data security strategy.

The first, is to treat consumer's data as if it was your own or that of your loved ones. The next, is to have a "true north", or to make sure the technology - however agnostic - is being used in the right way, he added.

The IMDA-accredited company often reviews its platform with medical experts to make sure they are on the "right track" ethically, and implements precautions such as encryption to anonymise data. It also limits access to client data internally.

"If you don't build trust in new technologies, like artificial intelligence or machine learning, consumers will not be comfortable with sharing their data," he said. 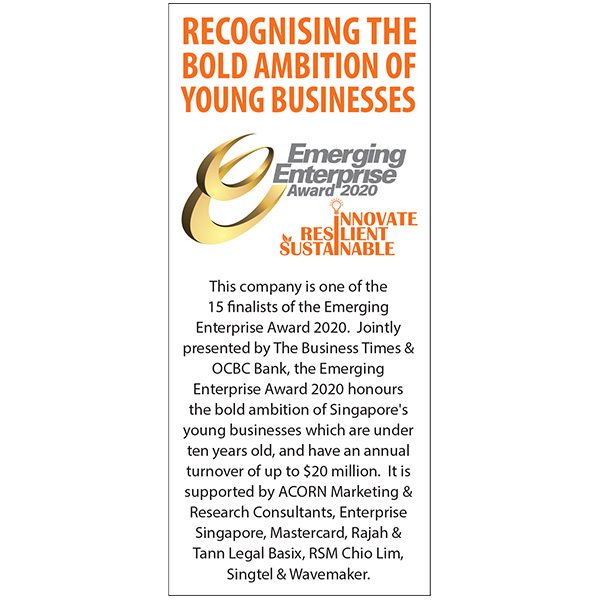 [CAIRO] United Arab Emirates (UAE) President Sheikh Khalifa bin Zayed, in his capacity as the ruler of Abu Dhabi, on...

[MUSCAT] Oman started coronavirus vaccinations on Sunday, two days ahead of plans to resume all flights and open...

HONG Lai Huat has announced a change in the intended use of the proceeds from its proposed renounceable non-...

Covid vaccinations start from Dec 30, with healthcare workers from NCID

SINGAPORE'S Covid-19 vaccination exercise kicks off on Wednesday, Dec 30 with healthcare workers at the National...

Covid vaccinations start from Dec 30, with healthcare workers from NCID

5% of vaccine stocks should be set aside for groups critical to Singapore's functioning: MOH expert committee