Jobseekers take longer time to get employed and re-entry into workforce is lower among those who lose their jobs
Chai Hung Yinchaihyn@sph.com.sg@ChaiHungYinBT
The labour market in Singapore softened dramatically in 2016, with the jobless rate at a six-year high as layoffs spiked and job vacancies fell.
ST PHOTO

THE labour market in Singapore softened dramatically in 2016, with the jobless rate at a six-year high as layoffs spiked and job vacancies fell.

Jobseekers are finding that it takes longer to get a job and for those who have lost their jobs, fewer of them were re-entering the workforce, according to the Ministry of Manpower's (MOM) Labour Market 2016 report released on Wednesday.

The overall unemployment rate rose to a seasonally-adjusted 2.2 per cent in December 2016, up from 2.1 per cent in September 2016, in line with MOM's preliminary figures. 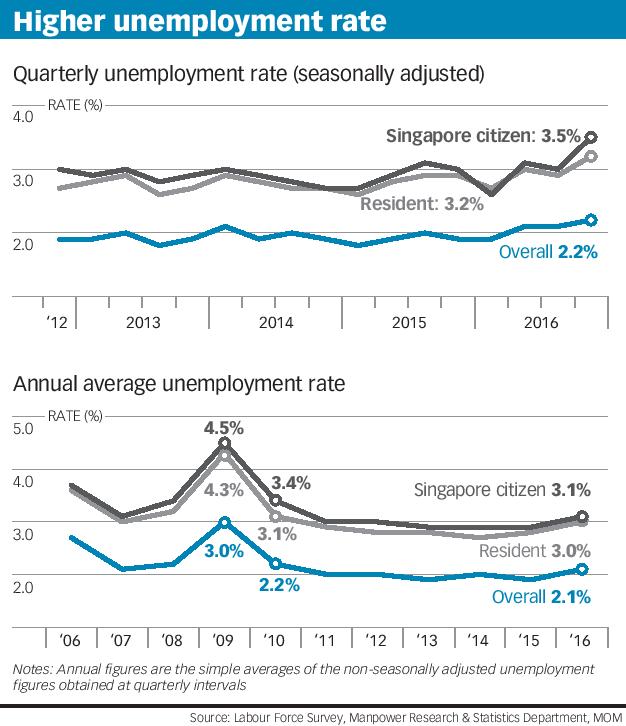 Degree holders and those with secondary education saw a larger hike in jobless rate, rising to 3.1 per cent in 2016 from 2.8 per cent and 2.7 per cent, respectively, in 2015. This is the biggest jump since 2009 for degree holders.

More jobseekers also took longer to find work. Notably, the long-term unemployment rate for degree holders rose to a 12-year high of one per cent.

Layoffs continued to rise and were higher than the previous quarter and a year ago, with more redundancies in manufacturing and services.

The annual average rate of re-entry among residents made redundant fell for the second consecutive year to 48 per cent in 2016 - the lowest since 2010.

The ratio of job vacancies to unemployed persons fell to 77 openings per 100 jobseekers in December 2016 on a seasonally-adjusted basis from 91 in September 2016.

Job vacancies fell to a four-year low of 47,600 in December on a seasonally-adjusted basis from 50,800 in the three months prior.

Foreign employment, excluding foreign domestic workers, declined for the first time since 2009's recession by shedding 2,500 jobs, along with tightening of foreign workforce supply. The contractions were mainly in construction and manufacturing.

Total employment also grew albeit slower in the fourth quarter of 2016, adding 2,300 jobs, due to seasonal hiring for year-end festivities, marking a turnaround from third quarter's contraction. The median income continued to grow over the last five years, although slower in 2016.

Despite Q4 GDP recovery, the job market continues to weaken to the softest since global financial crisis.

Citibank economist Kit Wei Zheng said: "With unemployment partly structural, improvements in external demand - even if sustained - may take longer to filter through to the jobs market."

NTUC assistant secretary-general Patrick Tay urged workers and employers to tap initiatives introduced by the government and to "embrace the changes before the change embraces them".

Managing director and country head of Kelly Services Singapore Foo See Yang said companies should look at the transferrable soft skills and right attitudes of talents, to help them ride out future challenges.

Workers should also be more proactive and flexible in jobseeking by applying for jobs within and across industries. "The decreasing number of job vacancies signals that workers need to be realistic in their job expectations and be open to new opportunities that come by," said Mr Foo.

Adecco Personnel (Singapore) director Glennis Chan noted that there are growth sectors worth looking at, such as healthcare services, information and technology, education, and compliance and security.

She said: "Technology is driving throughout most industries. We will see an increase in demand for skills in digital, STEM and analytics."

[FRANKFURT] German reinsurance giant Munich Re said Monday that it anticipates a boom in cyber-risk insurance in the...

[BRUSSELS] Angry European farmers are pushing for a ban on calling vegetarian products a "burger" or a "sausage"...

[LONDON] Britain and the European Union agreed on Monday to intensify trade talks and work on legal texts, a...