Vivien Shiaovshiao@sph.com.sg@VivienShiaoBT
Singapore's electronics exports in May posted their sharpest contraction since 2009, dragged down by the US-China trade conflict, the fading of the semiconductor cycle and weakening external demand.
PHOTO: ST FILE

NODX continues to fall as chips are down

SINGAPORE'S electronics exports in May posted their sharpest contraction since 2009, dragged down by the US-China trade conflict, the fading of the semiconductor cycle and weakening external demand.

Economists warn that electronics players should brace themselves for a long winter, as the ongoing US-China trade tension - the biggest wildcard - remains unresolved and the global appetite for chips wanes.

Overall, non-oil domestic exports or NODX, of which electronics is a subset, posted a dismal showing in May, plunging by 15.9 per cent, the biggest fall in more than three years. Enterprise Singapore, in the release of the monthly trade data, noted that this was due to the high base in May last year.

The fall follows two straight months of double-digit declines: It was a 10 per cent drop in April and an 11.8 per cent contraction in March. But it was slightly less gloomy than what economists had predicted earlier; they had expected an 18.7 per cent plunge in exports.

Singapore factory output down 0.7% in Dec, posts full-year fall of 1.4%

While the lacklustre performance in May came on the back of declines in both electronic and non-electronic shipments, it was the former that was the main drag.

Electronics plummeted 31.4 per cent in May, following a 16.3 per cent fall in the previous month. Integrated circuits (ICs or chips), disk media products and parts of ICs contributed the most to the drop.

OCBC Bank economist Howie Lee said the sharp fall in electronics exports was "mostly a result of poor demand", which was expected, given the continued sluggishness in the global electronics sector, particularly in China.

"We do not expect a quick turnaround in the fortunes of the electronics sector," he said.

"The multiple trade barriers by the US are likely to crimp global disposable income, dampening worldwide demand for smartphones and PCs and pushing the highly cyclical electronics industry into an even deeper downturn." 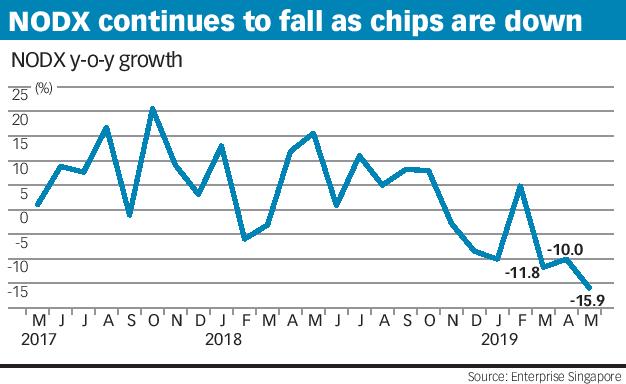 They noted that US export controls on tech goods to China, including Huawei, will worsen disruption to supply chains.

They wrote in a report: "With the broadening of the US-China trade war to a tech war, Singapore may face increasing pressure and collateral damage, given the widening reach of US export controls on emerging and foundational technologies."

Many multinational companies that abide by US export controls such as Intel, Micron, Broadcom and Panasonic have a presence in Singapore, the Maybank Kim Eng economists noted.

Non-electronics exports also weighed on NODX in May, marking its third straight month of contraction.

It fell by 10.8 per cent last month, with civil engineering equipment parts, non-monetary gold and petrochemicals contributing the most to the fall.

In comparison, exports of pharmaceuticals, which tend to be volatile, surged.

Non-oil exports to the majority of Singapore's top markets shrank in May, with the exception of the US. The largest contributors to the NODX decline were China, Taiwan and Hong Kong.

Total trade shrank by 2.1 per cent in May as both imports and exports declined, after the 3.2 per cent growth in the preceding month.

With the release of the latest NODX figures, several economists lowered their export forecasts for the year against the backdrop of a deteriorating external environment.

Some of the latest downgrades came from UOB, which lowered its projection to between -1 and -3 per cent in 2019 (from -1 per cent previously); OCBC lowered its forecast from -2.2 per cent to -2.6 per cent.

With exports hard hit, economists are speculating that Singapore could experience a severe economic downturn down the road.

Maybank Kim Eng's Mr Chua and Ms Lee are among those entertaining this possibility: "A full blown trade war, if (President Donald) Trump applies tariffs to the remaining trade items with China, could see Singapore slip into recession."

With so much at stake, all eyes will be on the leaders of the world's two biggest economies at the upcoming Group of 20 Summit in Osaka this month, when the US and China are expected to try to iron out a trade deal.

But economists are not holding their breath.

Dr Tan Khay Boon, senior lecturer at SIM Global Education, said: "With no deal between the US and China in sight, as well as the continuation of the messy Brexit and increasing instability in the Gulf region, the trade environment is unlikely to turn around in the immediate future."

No qualms for India's hangman before first job of executing rapists

[MEERUT] Pawan Kumar feels zero sympathy for the four men he is due to hang next month for a 2012 gang rape and...

[KUALA LUMPUR] A Malaysian rights group filed a suit in a domestic court against a Singapore minister on Friday,...

[LONDON] Euro zone business activity remained weak at the start of the year, a survey showed a day after the...