Janice Hengjaniceh@sph.com.sg@JaniceHengBT
Singapore's factory output soared by a surprising 13.7 per cent year on year in August, according to Singapore Economic Development Board figures on Friday.
ST PHOTO: ALPHONSUS CHERN

SINGAPORE'S factory output soared by a surprising 13.7 per cent year on year in August, led by strong growth in electronics, according to Singapore Economic Development Board figures on Friday.

The performance bodes well for overall gross domestic product (GDP) in the third quarter, with the economic contraction expected to ease, said economists.

Greatly exceeding economists' expectations of 2.2 per cent growth, the latest figure was a rebound from July's 7.6 per cent fall, which had come on the back of a strong base effect.

The electronics cluster put in the strongest showing by far, with output up 44.2 per cent year on year. This was mainly thanks to 56.9 per cent growth in the semiconductors segment, supported by demand from cloud services, data centres and the 5G market. With August's figure, electronics output for the first eight months of the year rose 4.1 per cent from the year-ago period.

Electronics output benefited from both “a favourable base effect and solid sequential growth”, up 6.1 per cent on a seasonally-adjusted monthly basis, noted Barclays economist Brian Tan.

The precision engineering cluster saw output grow 9.4 per cent, led by the machinery and systems segment, which grew 17 per cent on the back of higher production of semiconductor equipment. 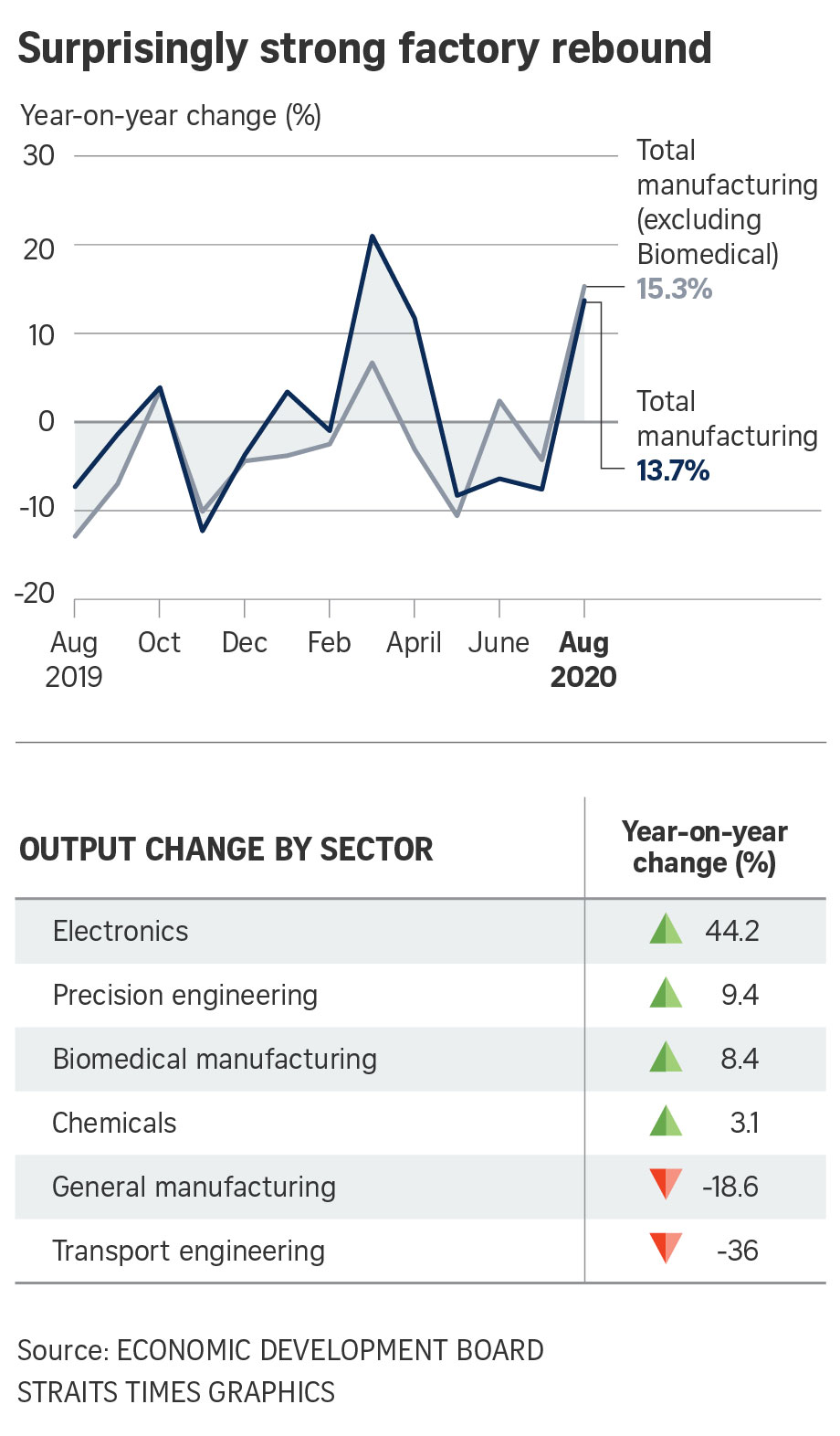 Biomedical manufacturing output was up 8.4 per cent, with growth in both medical technology and pharmaceuticals. The cluster has been the strongest performer on a year-to-date basis so far, up 18 per cent compared to the year-ago period.

Chemicals output rose 3.1 per cent, with gains in the specialties and petrochemicals segments more than making up for declines in petroleum and other chemicals. Year-to-date, the cluster's output is down 4.1 per cent from the year-ago period.

With low oil prices expected for the rest of the year, the chemicals and transport engineering clusters will likely stay depressed, said UOB economist Barnabas Gan.

Still, economists are optimistic about manufacturing as a whole, and expect the recent rise in output to give a boost to third-quarter GDP figures. UOB has upgraded its full-year outlook for industrial production to 2.5 per cent growth, up from a previous -2 per cent expectation.

Maybank economists Chua Hak Bin and Lee Ju Ye expect Q3 GDP to contract 6.3 per cent. They maintain a positive outlook for manufacturing, expecting robust demand for semiconductors and IT equipment to drive growth for the rest of the year.

The biomedical cluster is also likely to see healthy demand, driven by the global search for a vaccine, they added.

Even assuming a more modest showing in September, Q3 manufacturing growth is likely to be positive, at 2.5 per cent year-on-year, said OCBC head of treasury research and strategy Selena Ling. OCBC’s expectations for Q3 GDP growth have improved to -6.5 per cent, from -7.1 per cent previously.

“Our sense is that the uptick in the global electronics demand will likely sustain in the coming months as this improvement trend is apparent across other key regional manufacturing hubs including Taiwan and South Korea,” she added.

Johnson 'optimistic' over Brexit deal ahead of talks with EU chief

[SINGAPORE] Deputy Prime Minister Heng Swee Keat will not be unveiling a new round of support measures when he makes...

[BEIJING] A long-time colleague of Chinese Vice-President Wang Qishan is under investigation for corruption and...

[BENGALURU] Kellyanne Conway, a former counselor to US President Donald Trump, on Friday said she had tested...

Johnson 'optimistic' over Brexit deal ahead of talks with EU chief

[LONDON] UK Prime Minister Boris Johnson said he was "pretty optimistic" a Brexit deal could be reached as he...

More are checking into hotels - for work