Singapore now 4th most expensive city in the world for expats: Mercer

Rachel Muirachmui@sph.com.sg@RachelMuiBT
Singapore is now the fourth most expensive city for expatriates, having moved up one spot from last year's ranking, according to the latest Cost of Living Survey published by global HR consulting firm, Mercer.
ST PHOTO: LIM YAOHUI

SINGAPORE is now the fourth most expensive city for expatriates, having moved up one spot from last year's ranking, according to the latest Cost of Living Survey published by global HR consulting firm, Mercer.

Hong Kong tops the table as the world's costliest city for working overseas, followed by Tokyo and Zurich.

Said Mario Ferraro, Mercer’s global mobility practice leader for Asia, the Middle East, Africa and Turkey: "Across the board, currency fluctuations and inflation for goods and services drive up the cost of living in Asian cities."

"While Singapore has climbed up one notch in the cost of living rankings from the last year, this is balanced off with high salaries and a stable economy."

Asian cities lead the top 10 when it comes to the cost of living for expatriates by taking six of the top spots in Mercer's annual ranking. Also in the top 10 most expensive cities are Luanda (6), N’Djamena (8) and Bern (10).

On the other end of the spectrum, developing and war-torn cities populate the bottom of the ranking. The world's least expensive cities for expatriates are Bishkek (207), Tunis (208) and Tashkent (209).

With its soaring rents, Hong Kong recaptured the top spot from last year's leader Luanda, the capital of Angola, which fell to sixth position thanks to the weakening of its local currency against the US dollar.

Said Slagin Parakatil, principal at Mercer responsible for compiling the survey: "The strengthening of the Chinese yuan pushed Chinese cities up in the ranking, however, most cities in Japan fell in the ranking due to the weakening of the Japanese yen against the US dollar." 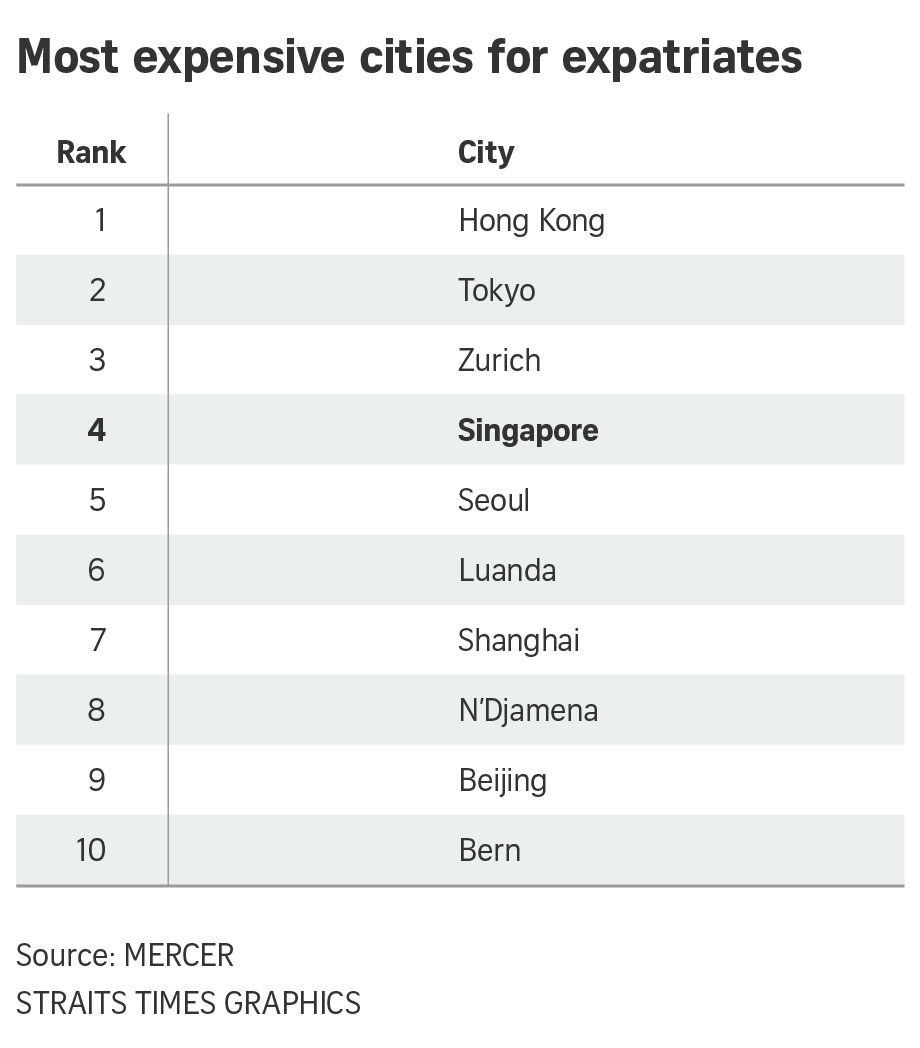 Elsewhere in Asia, Mumbai (55) is India's most expensive city, while Kuala Lumpur rose 20 places to come in at 145.

Conversely, Australian cities have fallen in this year's ranking as the Australian dollar has depreciated against the greenback. Brisbane (84) and Perth (61) dropped 13 and 11 spots respectively, while Sydney (29), Australia's most expensive ranked city for expatriates, experienced a relatively moderate drop of five places. Melbourne fell 12 spots to rank 58.

US cities also fell in the ranking due to the depreciation of the US dollar against other major currencies worldwide. New York dropped four places to No 13 globally, the highest-ranked city in the region.

Overall, Western European cities rose in the rankings, due mainly to the strengthening of local currencies against the US dollar and the cost of goods and services, Mercer said. Zurich (3) remains as the most costly European city, while London moved up 10 places to No 19; and Paris jumped 28 spots to place at No 34.

Mercer's 2018 survey covered 209 cities across five continents, measuring the comparative cost of more than 200 items in each location - including housing, transportation, food, clothing, household goods, as well as entertainment. New York was used as the base city for all comparisons, and currency movements were measured against the US dollar.

Singapore consistently ranks as one of the most expensive cities in the world.

Earlier this month, another Cost of Living Survey published by data provider ECA International cited Singapore as the ninth most expensive Asian city for expatriates, behind other cities within the region such as Tokyo, Seoul and Hong Kong.

Globally, Singapore took the 20th spot this year, having being in the 24th place in 2017. Nonetheless, this ranking is still below the city state's peak in 2016, when it ranked 18th worldwide.

ECA carries out biannual cost of living surveys in March and September that compare a basket of like-for-like consumer goods and services commonly purchased by expatriates around the world. However, living expenses such as accommodation rental, utilities, car purchases and school fees are not included as these are usually covered by other allowances, ECA said.

Separately, another report by international trust and corporate services provider Sovereign Group noted that while Singapore may be ranked as the most expensive city to live in by the Economist Intelligence Unit (EIU), a different ranking shows this is hardly the case, when personal income tax rates are taken into account.

Sovereign's index intends to do the same. However, it considers not just the comparative prices of goods and services in cities, but also how much an individual would need to earn to afford these items, after paying local taxes.

Singapore came in at 11th place for its top earners, according to Sovereign's latest tax-adjusted Worldwide Cost of Living Index.

For average earners, Singapore ranks a more modest 13th, trailing behind other Asian cities such as Tokyo (ninth), Osaka (10th) and Seoul (12th).

Sovereign's adjusted rankings for top earners were calculated by taking a city's EIU score, and multiplying it by the city's top rate of personal tax on earned income.

For average earners, the "all-in tax" rate was used instead. This refers to income tax as well as social security contributions as a percentage of gross wage earnings.

WHO: There may never be a Covid-19 'silver bullet'

Euro zone factory activity bounced back to growth in July

[VATICAN CITY] Former pope Benedict XVI, the first pontiff in 600 years to resign instead of ruling for life, is...

WHO: There may never be a Covid-19 'silver bullet'

[GENEVA] The World Health Organization said Monday that there might never be a "silver bullet" answer to the new...

CAPITALAND on Monday said that it and other shareholders have, through a series of transactions, divested an ...