HIGHER private road transport costs boosted Singapore's headline inflation in April, which matched economists' expectations of 0.8 per cent and outstripped March's 0.6 per cent figure, according to consumer price index (CPI) figures released by the Department of Statistics on Thursday.

Private road transport costs were up 1.1 per cent in April, reversing March's 0.9 per cent fall.

But core inflation, which strips out housing and private transport costs, eased to 1.3 per cent year on year - also in line with economists' forecasts - from 1.4 per cent in March. This marked the third straight month in which headline inflation edged up while core inflation eased.

With consensus forecasts having been spot on for April, economists stuck to their full-year estimates and their expectation that the MAS will leave its policy settings unchanged at its October meeting.

In contrast, food inflation slowed to 1.3 per cent, compared to 1.6 per cent in March. And electricity and gas costs fell 2.8 per cent, a reversal from March's 3.9 per cent rise. This was due mainly to lower electricity tariffs and the dampening effect of the phased Open Electricity Market rollout.

Accommodation costs fell at 1.4 per cent in April, the same pace as in March.

The Monetary Authority of Singapore (MAS) and the Ministry of Trade and Industry maintained their inflation outlook from the previous month.

"For the rest of 2019, external sources of inflation are likely to be benign," they said, noting that global oil prices have risen in recent months but are not expected to exceed last year's average for 2019 as a whole, while global food prices "should also only pick up slightly on average". 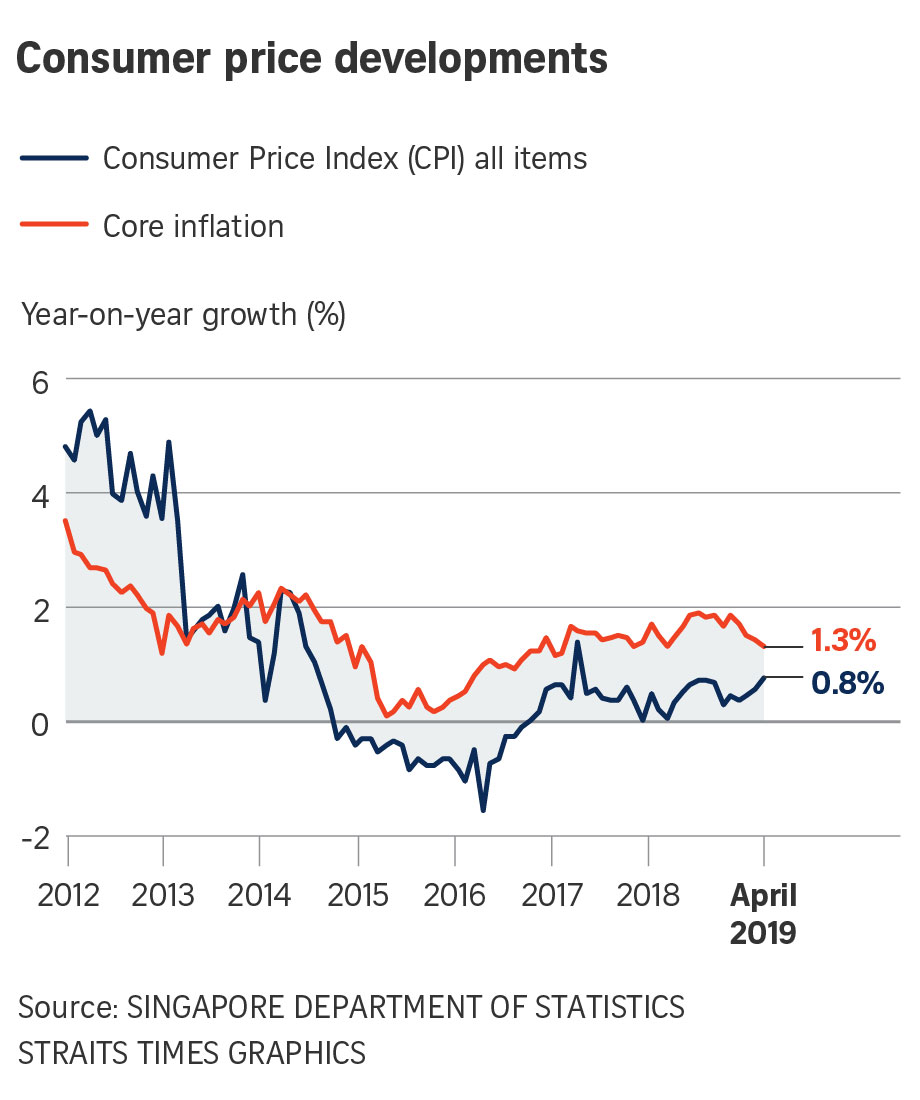 At home, labour market conditions remain firm and will support moderate wage increases, but an acceleration in inflationary pressures is unlikely. The MAS and the MTI continue to expect core inflation for 2019 to come in near the mid-point of the official forecast range of 1 to 2 per cent, while headline inflation is expected to average 0.5 to 1.5 per cent.

On the likelihood that the MAS would stay put in October, Citi economists Kit Wei Zheng and Ang Kai Wei said: "With policy still accommodative... the hurdle for an October easing is still high." They said it would require a "stronger conviction" that core inflation will average below 1 per cent, including in 2020, for the MAS to ease policy in October.

Noting that the nationwide rollout of the Open Electricity Market was only completed recently on May 1, Maybank economists Chua Hak Bin and Lee Ju Ye see downside risks remaining for core inflation, saying: "We expect utilities costs to continue sliding for the rest of 2019 as more households switch to alternative retailers for cheaper rates."

The escalating trade war between the United States and China will also be deflationary for third countries like Singapore, they added. Their 2019 forecasts stay at 1.4 per cent for average core inflation and 1.2 per cent for headline inflation.

OCBC economist Selena Ling sees some upside risk to headline CPI for the rest of 2019, with high inflation for oil-related items due to a low base in late 2018. Current Certificate of Entitlement premiums are also higher than 2018 lows and may contribute to sustained private road transport inflation. But she too thinks it unlikely that the MAS policy bias will change in the interim, as core inflation is still easing.

Barclays economist Brian Tan kept his forecast of full-year core inflation averaging 1.5 per cent, as well as his expectation that "the dark clouds looming over the economic growth outlook" are not going to clear this year.