Singapore's inflation up in May, in line with economists' expectations

Janice Hengjaniceh@sph.com.sg@JaniceHengBT
Singapore's headline inflation rose in May with further increases expected over the course of the year.
PHOTO: AFP

SINGAPORE'S headline inflation rose in May with further increases expected over the course of the year. The consumer price index (CPI) was up 0.4 per cent year-on-year, in line with economists' expectations and picking up the pace from April's 0.1 per cent rise, according to a Department of Statistics statement on Monday.

Core inflation, which strips out the cost of accommodation and private road transport for a better gauge of everyday expenses, rose 1.5 per cent year-on-year, a faster pace than the previous month's 1.3 per cent rise.

The increases in both headline and core inflation were largely due to a faster pace of price increases across all the major categories of the CPI basket, except food, said the Monetary Authority of Singapore (MAS) and the Ministry of Trade and Industry (MTI) in a joint statement.

Contributing to headline inflation's rise was an increase in the cost of private road transport, which edged up 0.1 per cent in May, reversing April's 0.8 per cent decline. This was due to a faster pace of increase in petrol prices, and a smaller year-ago fall in car prices following a rise in Certificate of Entitlement premiums.

Services inflation rose to 1.6 per cent in May, compared to 1.3 per cent the previous month, largely due to a stronger pickup in holiday expenses and airfares, and a smaller year-ago decline in telecommunications services fees. Retail prices also saw a larger 1.3 per cent rise, compared to April's 0.9 per cent rise.

Food inflation, however, slowed to 1.3 per cent in May, down from 1.4 per cent in April, as price increases for non-cooked food items moderated. Prices of prepared meals rose at a similar pace as in the previous month. 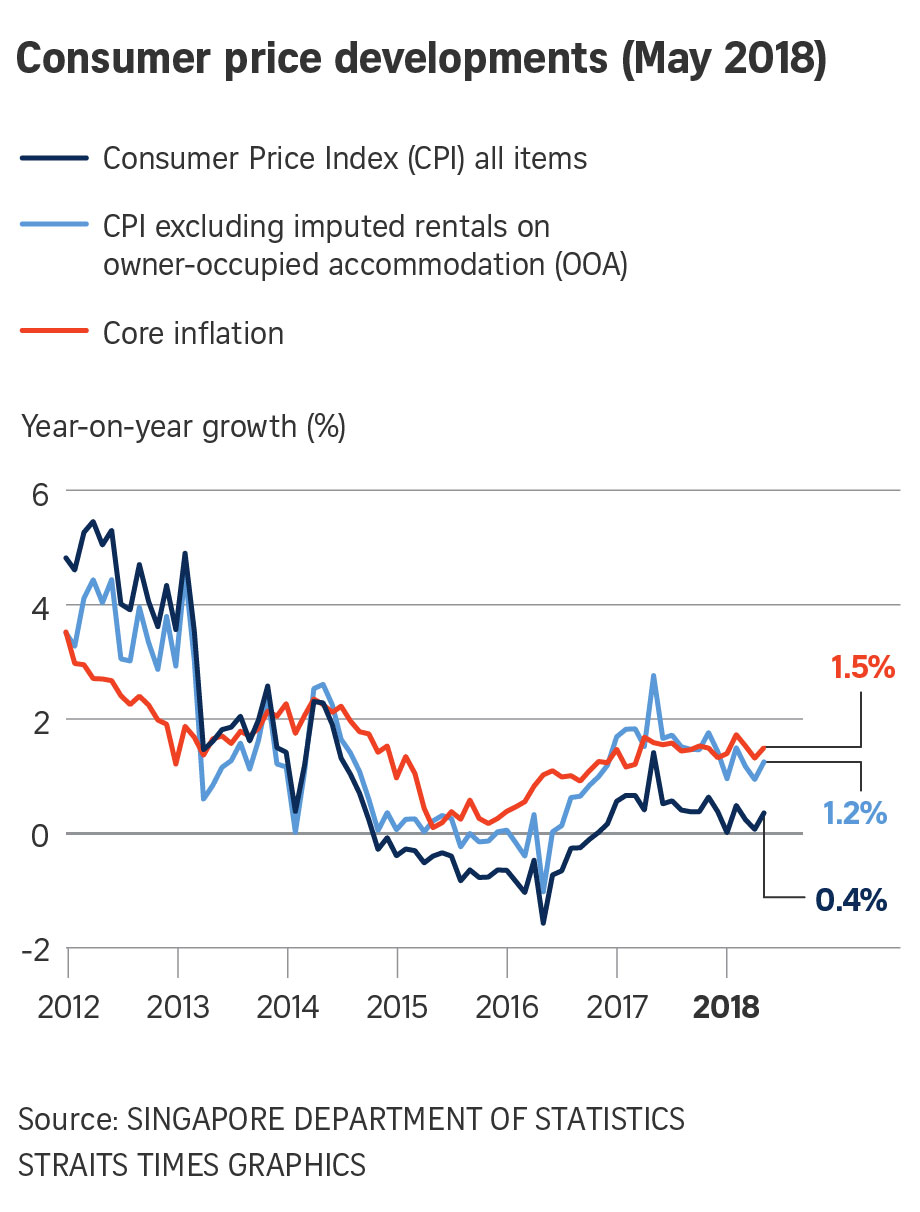 The cost of accommodation continued to fall in May, but at a slowing rate, with prices down 3.2 per cent in May, compared to April's 3.6 per cent decline.

The MAS and the MTI expect imported inflation to "rise mildly", pointing to how global oil prices have rallied since the start of 2018 and are expected to average higher for the full year than in 2017. Global food commodity prices are also projected to rise slightly.

Domestic sources of inflation are also expected to increase "alongside a faster pace of wage growth and a pickup in domestic demand", they said. "However, the extent of consumer price increases will remain moderate, as retail rents have stayed relatively subdued and firms’ pricing power may be constrained by market competition."

10 new Covid-19 cases in Singapore, eight of them imported

[SEOUL] South Korea's parliament on Tuesday passed a Bill to allow globally recognised K-pop artists such as BTS to...

[FRANKFURT] Deutsche Bank is planning to cut one in three jobs at its retail banking hubs in Frankfurt and Bonn as...

THE board of mm2 Asia is evaluating a spin-off of its cinema business and a listing on the Catalist board, the...

Amazon says sellers racked up more than US$4.8b in sales over weekend

[SEATTLE] Amazon said on Tuesday independent businesses selling on its platform crossed US$4.8 billion in worldwide...

Restaurant industry has yet to tap full potential of technology, say industry players

THE restaurant industry has digitalised at an unprecedented rate amid the Covid-19 pandemic, but restaurateurs...