Fiona Lamfiolam@sph.com.sg@FionaLamBT
In Singapore, the Monetary Authority of Singapore (MAS) is expected to ease policy in October, shifting to a zero-appreciation bias in its key policy tool, S$NEER, a trade-weighted baskets of currencies against the Singapore dollar.
PHOTO: ST FILE

ECONOMIC growth in South-east Asia is forecast to ease to 4.5 per cent this year from 5.1 per cent in 2018, before stabilising at the same rate of 4.5 per cent in 2020, British advisory firm Oxford Economics said on Thursday.

The slowdown comes amid a fresh round of tariffs and trade restrictions by the US and China, according to the firm’s latest Economic Update: South-East Asia report.

Produced by Oxford Economics and commissioned by the Institute of Chartered Accountants in England and Wales (ICAEW), the report is a quarterly review of the region’s economies, focusing on Indonesia, Malaysia, the Philippines, Singapore, Thailand and Vietnam. Oxford Economics is ICAEW’s partner and economic forecaster.

“Amid ongoing global headwinds and uncertainty around the outcome of US-China trade talks, we expect to see a further deterioration in economic prospects across the region,” said Sian Fenner, ICAEW economic advisor and Oxford Economics lead Asia economist.

Accommodative macro policies, coupled with domestic-driven activities, are likely to cushion the weaker trade outlook, according to Mark Billington, ICAEW regional director for Greater China and South-east Asia. However, this will vary across economies, with growth set to remain below potential in Indonesia, the Philippines and Thailand, while Singapore braces for the hardest impact, Mr Billington added.

This was due to spill-overs from the US-China trade war, slower Chinese domestic demand and a downturn in the global electronics cycle, the report stated.

Slower export momentum has also weighed heavily on the growth of trade-dependent economies, such as Singapore, Thailand and the Philippines.

Meanwhile, Malaysia and Vietnam have outperformed the region, with a more modest deceleration in export growth and resilient domestic demand. 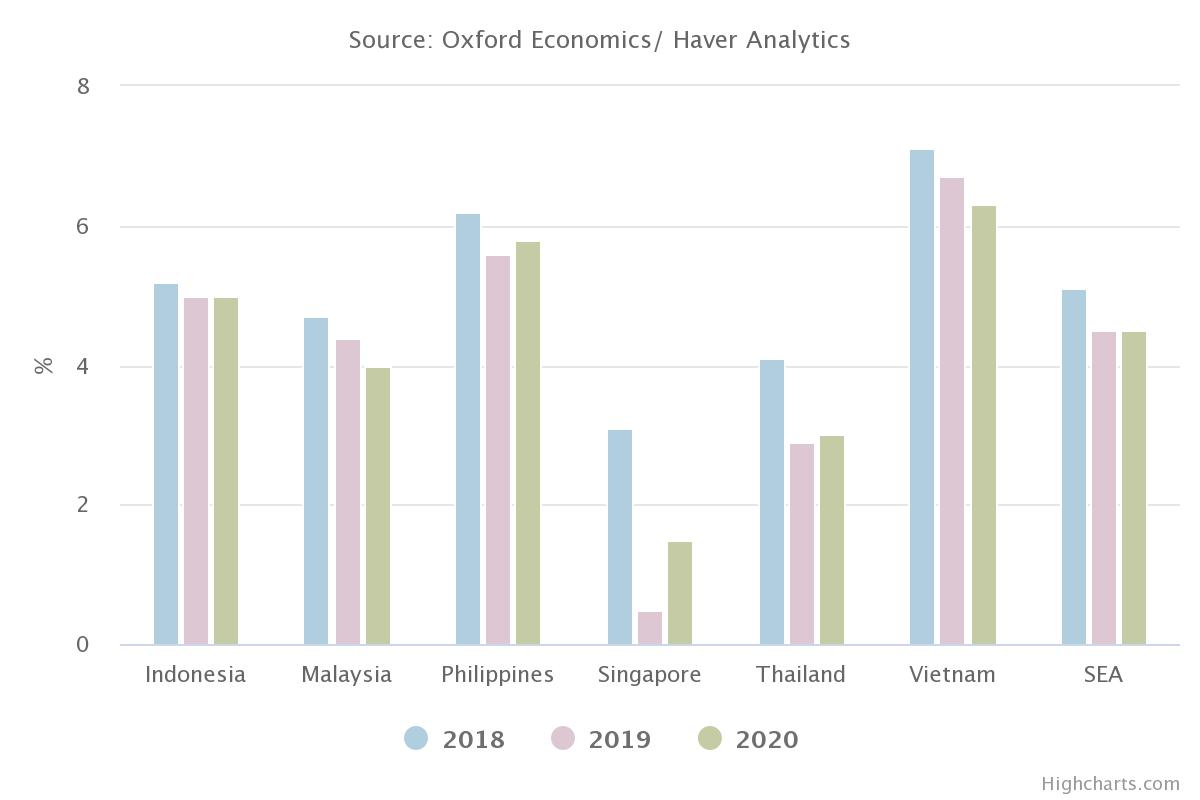 The central banks of Indonesia and the Philippines are forecast to cut interest rates once more in Q4 2019, after each having trimmed their rates by 50 basis points (bps) so far this year. Likewise, Thailand and Malaysia are expected to lower rates by at least 25 bps by early 2020.

In Singapore, the Monetary Authority of Singapore (MAS) is expected to ease policy in October, shifting to a zero-appreciation bias in its key policy tool, S$NEER, a trade-weighted baskets of currencies against the Singapore dollar. The city-state is forecast to dip into a manufacturing-led technical recession – two consecutive quarters of negative growth – in Q3 2019.

Elsewhere in the region, Vietnam is set to continue outperforming the rest of South-east Asia thanks to positive trade diversion effects, albeit with a moderation in its GDP growth to 6.7 per cent this year, followed by a further slowdown to 6.3 per cent in 2020, according to the report.

In Q2 2019, Vietnam recorded a 5.7 per cent rise in GDP, only slightly lower than the 6.8 per cent in Q1 2019. It has been able to outperform other regional economies because of a 33 per cent year-on-year surge in exports to the US in H1 2019, which helped to offset slower trade with China and other regional markets.

However, if the US imposes higher import tariffs on Vietnam, Vietnam's GDP growth is likely to be cut to 5.9 per cent in 2020-21, compared to a baseline of 6.2 per cent, the report noted.

As for Myanmar, its GDP is forecast to expand by 6.4 per cent in 2018-2019, before picking up to 6.8 per cent in 2019-20, buoyed by foreign investment in key sectors. Infrastructure, manufacturing and wholesale and retail services are expected to the greatest beneficiaries.

Closures, layoffs likely to rise, but nation will pull through: PM Lee

NDP celebrations routed across the heartlands

US official's visit to Taiwan begins, adding to tension with China