Leasing market to remain resilient even as the significant supply of unsold units will continue to be a challenge
Kalpana Rashiwalakalpana@sph.com.sg@KalpanaBT
Singapore's private housing market is poised for modest price growth next year, amid a resilient leasing market.
PHOTO: AFP

SINGAPORE'S private housing market is poised for modest price growth next year, amid a resilient leasing market. However, developers are expected to continue being challenged by the significant supply of unsold private housing units in the pipeline although, by some estimates, the oversupply could ease by the end of 2021.

Data from the Urban Redevelopment Authority (URA) shows that as at the end of the third quarter of this year, there were 31,948 unsold units in uncompleted private housing projects with planning approvals - down from the most recent high of 36,839 at end-Q1 this year. Assuming that developers continue to sell about 9,000 private homes on average per year, take-up will total around 18,000 units in the next two years (2020 and 2021). Land supply from the confirmed list of the Government Land Sales (GLS) Programme, on the other hand, is assumed to be about 3,000 private homes annually - or 6,000 units over the two years.

The higher take-up numbers against the GLS supply will result in a net reduction of around 12,000 units from the pool of unsold, uncompleted private homes.

Ong Teck Hui, JLL's senior director of research and consultancy, said: "If the GLS continues to be conservative and outstripped by primary-market sales, we could see the figure fall to under 20,000 units by end-2021, potentially setting the stage for a market recovery."

"If by then, Singapore's economic growth has picked up and home-buying demand improves, that would pave the way for stronger growth in private home prices," Mr Ong added.

Agreeing, Edmund Tie & Co's senior director of research and consulting, Alice Tan, noted that the reduction of unsold, uncompleted units in the pipeline in the next couple of years will be aided by the fact that private housing land supply originating from the private sector has dried up after the July 2018 cooling measures ended the collective sales fever.

By then, the confirmed list of the GLS Programme had been trimmed over the preceding few years, and the addition to the pipeline was less than primary-market sales. Home-buying sentiment had also begun to improve around the time, with the relaxation of the seller's stamp duty for residential properties. Developers became hungry for land, fuelling the collective sale fever.

The benchmark URA private home price index in Q3 this year was up 2.1 per cent from Q4 last year.

Most property consultants are expecting a full-year increase of 2-3.5 per cent, a slower rise than the 7.9 per cent gain in 2018. 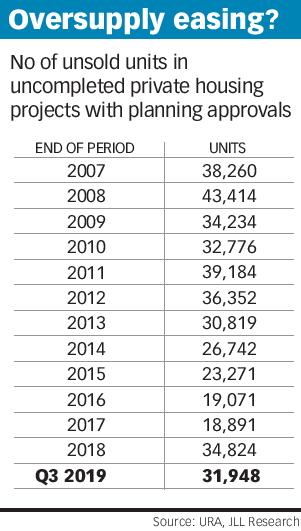 CBRE's head of research for Southeast Asia, Desmond Sim, is a tad more conservative. He predicts the index will rise by up to one per cent in 2020 while JLL's Mr Ong expects the index change to range from -one to +one per cent, given the economic slowdown and prevailing oversupply. Based on ERA's data, there were 52 private housing project launches this year (as at Dec 1).

CBRE's Mr Sim, who noted that this is the highest number of launches in five years, said: "Smaller units continue to be the main driver of sales. Due to high per square foot prices, home sizes are compromised to keep the absolute quantum palatable to buyers."

Observers also noted that the take-up for 2019 launches has been uneven. Besides pricing, locational and other differences, one key factor that affected the success of launches is developers' willingness to reward agents. Commissions for some launches this year were as high as 3-4 per cent. "Commissions used to be less than 2 per cent in 2017 before creeping up to 2-2.5 per cent after the July 2018 property cooling measures," an insider told BT.

Mr Lim of ERA acknowledged that 2019 has been a better year for property agents. "But we've all had to work very hard for the money. Buyers have a lot of choices in the market, and agents need to follow up closely to ensure that they do not lose their leads. We would be expecting similar conditions for 2020." There is speculation that some bigger agencies plan to ask developers for even higher commissions next year - though there is a limit to how much developers can pay, given the thinning margins.

Ms Tan of ET & Co noted that despite the cooling measures and economic slowdown, URA's release of the draft Master Plan 2019 in March has been a key impetus that supported private residential demand this year.

Next year, CBRE's Mr Sim expects developers to focus on their existing inventory while remaining prudent in their land bidding strategies. "In marketing projects, they will continue to focus on intrinsic attributes such as lifestyle themes, design, location, tenure and finishes to drive sales."

JLL's Mr Ong said developers may adopt a firm pricing strategy in 2020 if the market remains stable with improving sales volume. "However if demand softens, launch prices are likely to be tempered and there could be adjustments to prices of previously launched projects."

Ms Tan envisaged continuing buying interest in well-positioned and attractively-priced projects near MRT stations and lifestyle amenities. That said, she highlighted the increasing competition for suburban private homes from the public housing market and the Enhanced CPF Housing Grant for HDB flat buyers. "Developers of suburban private condos can be expected to step up marketing efforts and respond to the price sensitivity and aspirations of this group of suburban homebuyers," said Ms Tan.

While the volume of private homes sold by developers this year will be higher than last year, the number of private homes transacted in the resale market is expected to be lower. Mr Sim estimated the figure for 2019 at about 8,400-8,500 units, down from last year's 13,009 units. His forecast for 2020 is about 9,000 units.

URA's private residential rental index for Q3 2019 was up 2.4 per cent from Q4 2018. JLL's Mr Ong expected the index to end this year with a 2.5-3 per cent gain on the back of low supply completion and falling vacancy.

A total of 7,933 private homes are expected to receive Temporary Occupation Permit (TOP) this year, down from 9,112 units last year. The islandwide vacancy rate eased to 6.1 per cent at end-Q3 2019 from 6.4 per cent in the previous quarter.

Based on Savills Singapore's analysis of URA Realis data, a total of 26,998 private residential leases commenced across the island in Q3 2019 - up 12.9 per cent quarter on quarter, and 4.2 per cent year on year and also the highest ever quarterly figure.

Savills research head Alan Cheong said: "Besides seasonal factors, the active rental market was supported by the strong inflow of expatriates. The growth was witnessed across all industries - such as banking and financial institutions, tech, pharmaceuticals, consumer goods and services - and has also offset the outflow of some expats amid the uncertain business environment in recent quarters.

"From agents' feedback, a significant portion of the expats are on project-based work. Their monthly housing allowance is mainly in the S$4,000-8,000 range for those from the traditional economy firms, and below S$4,000 for many working for tech companies and other disruptors (new economy)."

Mr Cheong was confident that the full-year 2019 tally for leasing transaction volumes will set a record. Despite the slowing economy, "the strong momentum will continue in 2020, as companies continue to transfer staff to Singapore", he added.

"The (leasing) market in 2020 may be driven by the continuing expansion of the overseas workforce in both the new and old economies."

[HONG KONG] A majority of Hong Kong's pro-democracy lawmakers plan to remain in office after China's decision to...

[NEW YORK] Lesbian, gay and bisexual people are much more likely than straight people to get migraines, US research...

THE Built Environment Living Lab Framework (BE LLF) has been launched to enable test-bedding of innovative solutions...

27 new Covid-19 cases in Singapore, including 1 in the community and 9 imported

[SINGAPORE] There were 27 new coronavirus cases confirmed as of Tuesday noon (Sept 29), taking Singapore's total to...

Stratech unable to provide exit offer, to be delisted on Oct 23