IPOs on SGX down, but cautious optimism prevails

LIKE most exchanges globally, Singapore Exchange (SGX) has seen a slowdown in the number of initial public offers (IPOs) in the first-half of 2018, as rising geo-political tensions and trade risks dent confidence.

Max Loh, EY Asean and Singapore managing partner, said SGX attracted seven IPOs in the first six months of the year, down 30 per cent from H1 2017, when there were 10 IPOs.

Total proceeds raised climbed to US$0.4 billion from US$0.3 billion. This was anchored mainly by the listing of Sasseur Reit, an operator of China outlet malls, which raised some US$305 million.

"The other IPOs were predominantly smaller-cap listings, with a couple of IPOs in the health-care sector," Mr Loh said.

Its spokesman said: "We are very pleased that total funds raised through equity primary and secondary fund-raising against a volatile market continued to be robust in Singapore, with funds raised growing more than four times in FY2018 compared with FY2017 (financial year ended June 30)."

Half the new listings on SGX this year so far were cross-border deals, with companies hailing from countries such as Germany, Korea, Myanmar, China and Malaysia. 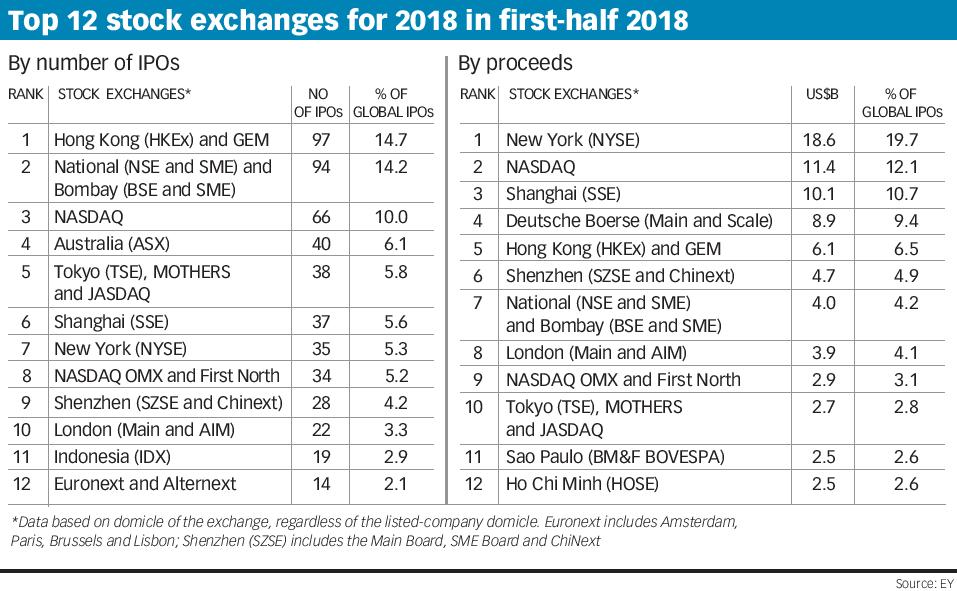 "Looking ahead, we are seeing a very healthy pipeline of mandates in our leading sectors, including consumer, healthcare and technology, from domestic and international companies," said the spokesman, who added that SGX's partnerships with Nasdaq, Tel-Avi Stock Exchange and its recently announced dual-class share (DCS) structure have also accelerated interest for a listing in Singapore.

Underpinning SGX's optimism is also a 50 per cent increase in bond listings on the exchange in FY2018, which it says reflects market demand for fund raising through both debt and equity.

Other than Reits, Singapore IPO activity is expected to be driven mostly by entrepreneurial companies coming to market.

Experts said the adoption of SGX's DCS listing rules would accommodate the listing of more high-growth companies in their quest to raise capital, while broadening investment options for investors and adding to the vibrancy of Singapore's capital market.

"This has to be a positive move in spurring new IPOs, but it cannot be seen as a single silver bullet. There are many other factors that companies take into consideration in determining when and where to list," Mr Loh said.

Corporate strategy, valuation, a capital market capability, a market's liquidity as well as initial and ongoing costs are some of the other factors determining IPO destinations.

During the first half of the year, seven Singapore companies sought listing in Hong Kong, up from three in H1 2017, Ms Tay noted.

There were 97 IPOs in Hong Kong, which leads the global rankings in terms of the number of IPOs; it clinched 14.7 per cent of global IPOs. It beat Nasdaq and New York Stock Exchange (NYSE), which saw 66 and 35 IPOs respectively, in the first six months of 2018.

In terms of proceeds, Hong Kong slipped to fifth position, raising US$6.1 billion; NYSE and Nasdaq led the global rankings at US$18.6 billion and US$11.4 billion respectively.

EY forecasts a total of HK$200 billion in funds will be raised by IPO activities in Hong Kong in 2018.

Looking at the rest of the year, IPO activity levels in the region will depend, in part, on the mega IPOs, particularly as China looks to repatriate technology unicorns.

Biotech is the sector to watch among upcoming IPOs for Q3 2018. Issuers from the entertainment, mobile gaming and publishing sectors also have sizeable IPOs on the horizon.

IPOs in other parts of the region - Thailand, Indonesia, the Philippines, Malaysia and Singapore - will be predominantly small-cap listings.

"This is a trend we expect to continue in H2 2018 as geo-political uncertainty, trade tensions and macroeconomic conditions continue to dampen IPO activity," EY said.

MYANMAR-FOCUSED Yoma Strategic Holdings' full-year net loss has widened to US$60.5 million, from US$36.9 million a...

HOME buyers snapped up over 90 per cent of the 120 units launched for The Landmark on Saturday, the first day of...

[SINGAPORE] There were eight new coronavirus cases confirmed as of Sunday noon, taking Singapore's total to 58,213...