Riyadh, US authorise release of crude stockpiles; but analysts say price hike could extend if Persian Gulf hostilities escalate
Tay Peck Gekpeckgek@sph.com.sg@PeckGekBT
The weekend attack on Saudi oil plants that slashed global supply by 5 per cent has brought to the fore security vulnerabilities faced by upstream and downstream oil facilities around the world, adding to the upward pressure on oil prices.
PHOTO: AFP

THE weekend attack on Saudi oil plants that slashed global supply by 5 per cent has brought to the fore security vulnerabilities faced by upstream and downstream oil facilities around the world, adding to the upward pressure on oil prices.

The pre-dawn raid last Saturday by drones on two major Saudi oil installations - the world's biggest crude-processing facility in Abqaiq and the kingdom's second largest oil field in Khurais - removed an estimated 5.7 million barrels of oil per day from global supply in what is the biggest shortage shock in history.

Oil prices soared about 15-20 per cent on Monday when markets opened - said to be the highest single-day jump in almost three decades, with Brent futures trading as high as US$71.95 per barrel (bbl) and another benchmark West Texas Intermediate hitting US$63.34 at its height, before easing to about US$66 and US$60 respectively.

The pullback came after Riyadh said it expects to restore by Monday half the production lost and full recovery in a few weeks' time. In the meantime, the kingdom will draw down on its crude oil stockpile, which should be adequate to cover the temporary supply outage of 35-40 days to meet export obligations to its customers.

Analysts were also assured by the US authorising the release of emergency inventory from its strategic petroleum reserves.

But should supply take longer than expected to return to normal, or if the attacks lead to retaliation and heightened hostilities in the Persian Gulf, all bets will be off.

Phillip Futures investment analyst Benjamin Lu said that although markets would be adequately supplied from global storage networks, sentiment will remain fragile over looming supply-side uncertainties. "A prolonged supply outage from Saudi Arabia and heightened tensions in the Middle East will add a risk premium to oil prices for the near term."

DBS Group Research wrote in a report published on Monday that there could be upside risks to its US$65/bbl forecast for the rest of 2019.

The risks could also extend beyond near-term spikes in oil prices. 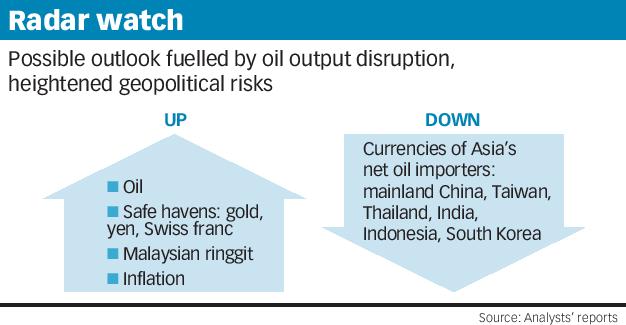 AxiTrader Asia Pacific market strategist Stephen Innes noted that the relative ease in which the attack was executed suggests other global oil supply chain focal points could also be equally vulnerable to attacks, and that global risk premium could remain elevated for some time.

"Indeed, we could be dealing with a significant game changer for oil markets over the short to medium term as security levels continue to flash red," he said.

Citi Research said the key takeaway from the incident is that oil infrastructure might be highly vulnerable to attack, and that the market has persistently mispriced this risk. It reckons oil "should have been a good US$10 a barrel higher than it has been for months".

While Saudi Arabia could have missed the fleet of drones on its radar, the episode has not escaped market pundits and has fuelled a flurry of reports on heightened geopolitical tensions and the possible impact on various types of assets.

In a tweet after the incident, US President Donald Trump said his country was "locked and loaded" and there was a "culprit" awaiting confirmation, in a thinly-veiled reference to Iran being behind the attacks.

IG market strategist Pan Jingyi commented: "While it takes a couple of days for oil production to resume ... it is the risk of further escalation that continues to cast a shadow across markets. "

Hussein Sayed, chief market strategist at FXTM, floated the possibility of oil prices hitting US$100/bbl as "the chances of military conflict in the region have risen dramatically".

Oanda Asia-Pacific senior market analyst Jeffrey Halley forecast that safe haven investments such as gold and the likes of Japanese yen and Swiss Francs are likely to outperform along with precious metals.

The Malaysian ringgit appears to be a beneficiary as the country is a consistent net exporter of oil and gas, said AxiTrader's Mr Innes.

In contrast, heavyweights such as China, India, Taiwan and South Korea are likely to feel the full force of the spike in oil prices, being massive net energy importers, said Oanda's Mr Halley.

In Singapore, ExxonMobil Singapore and Shell have declined to comment on any protection against drone attacks while the Ministry of Trade and Industry did not respond by press time.