SOUTH-east Asia could keenly feel the fallout from the regulatory brakes slammed on Ant Group's US$34 billion initial public offering (IPO), a development which is expected to slow down the fintech giant's global expansion efforts.

The group's portfolio companies in the region include Indonesia's e-wallet Dana, e-commerce site Bukalapak, and, most recently, Wave Money in Myanmar. Its biggest backer Alibaba has invested in e-commerce majors Lazada and Tokopedia and is reportedly eyeing a US$3 billion deal with Grab.

Ant's original strategy was to create a multi-jurisdictional digital wallet through which users and companies could transact with each other from anywhere in the world.

This has already proved extremely challenging in South-east Asia, where the fintech space is crowded and localisation is key, said Zennon Kapron, the director of fintech research and consulting firm Kapronasia.

Now, there will be major distractions too. The sudden suspension of Ant's dual listing in Shanghai and Hong Kong, set to be the world's largest IPO, came amid regulatory concerns over the fintech giant. Ant is now expected to put its global ambitions on hold as it scrambles to get its house in order, observers said.

China has been tightening its control of fintech companies in recent months. On Monday, the central bank and regulators issued draft rules on online micro-lending, which would impose stricter capital requirements and operational rules on some of Ant's consumer credit businesses.

While the specifics are unclear, any funding curbs or higher capital requirements on Ant are likely to land a blow on the company's expansion, investment and acquisition capacity, both domestically and outside of China. 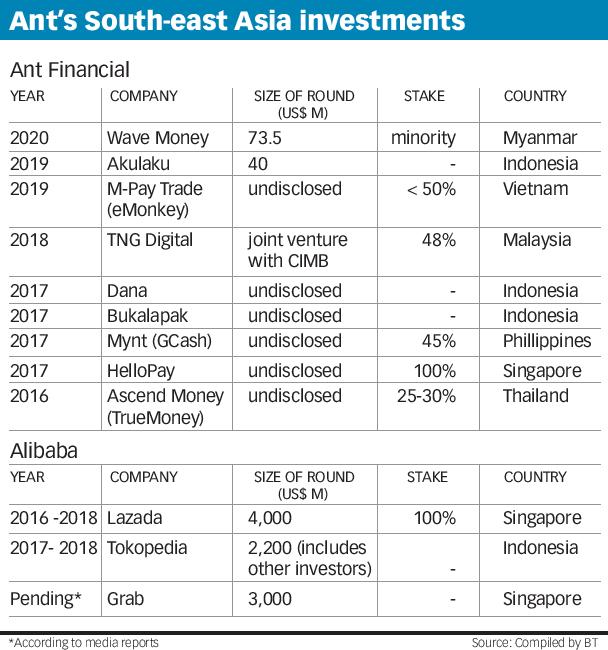 "No degree of success overseas will be able to compensate for the loss in the home market, because the scale is much larger," Bloomberg analyst Ling Vey-Sern told The Business Times. "Ant's priority, first and foremost, is to fix its domestic business in accordance with the regulator's wishes. Overseas expansion will become secondary."

This could limit the support that the group extends to its foreign portfolio companies. Even before the suspension of its IPO, the Alibaba-backed fintech giant had already been cutting funding and staff support to many of the e-wallet firms it had invested in, Reuters reported last month.

Forrester analyst Meng Liu believes that, even as a struggle with regulations deals an immediate impact on expansion plans, the company needs to tap international markets aggressively if it wants to continue on its high-growth trajectory in the next few years.

Back home, besides its archrival Tencent, tech companies such as Meituan and ByteDance are already creeping into the fintech space and could pose serious competition to Ant.

Ant Group might benefit from planting its roots further overseas and tapping a wider network beyond China - especially through branching out into neighbouring countries in South-east Asia.

Although its track record in South-east Asia is debatable, the region is still regarded as a key battleground for the fintech giant. Chinese companies have been seeking to tap the rapid growth in emerging markets here, where the tech ecosystem has yet to reach the level of maturity seen in China.

Forrester's Mr Liu told BT that Ant is likely to continue its bid for a digital banking licence in multiple jurisdictions including Singapore, which will be a crucial step in chartering its expansion in South-east Asia.

Now that China seems bent on making its stance on fintech regulation clear, it could give more room for Ant to proceed with clarity for any expansion it takes on. One of the key uncertainties around it has always been how it will be regulated - as a tech company or as a financial firm. It appears regulators are leaning towards the latter.

"No one prefers to build a house on a loose ground. With all its risk sorted out and managed, it will have a strong foundation to take up all other strategic directions," said Liu Genping, a partner at Vertex Ventures.

"Also, a clearly regulated business in the domestic market - meaning less uncertainty and fewer unclear risks - always makes it easier for the company to approach foreign partners and regulators."

[NEW YORK] As Airbnb prepares for its long-awaited Nasdaq debut, other consumer-facing technology companies are...

IN a move to boost mental well-being, the majority of UOB's 26,000-strong workforce will have the option to work...