Claudia Chongchongkmc@sph.com.sg@ClaudiaChongBT
4 -min read
Listen to this article
Dr Tan said the firm has "a couple" of portfolio companies that are planning to go public next year. "I think that might be delayed by six months? But there's nothing imminent that is going to affect them."
PHOTO: VICKERS VENTURES PARTNERS
Claudia Chong chongkmc@sph.com.sg @ClaudiaChongBT
4 -min read
Listen to this article

THE novel coronavirus pandemic has raised the potential of deep-tech investor Vickers Venture Partners' portfolio, said chairman Finian Tan, as the firm announced it has secured commitments of US$200 million for its largest fund yet.

The upcoming US$500 million Fund VI - set to be the largest non-government linked venture capital fund raised by a firm based in South-east Asia - is already invested in synthetic vaccines maker Emergex.

"We are very confident it will have a viable vaccine (for Covid-19) within 12 to 18 months," Dr Tan said on Thursday.

Another Vickers portfolio company called DrugArray, based in the US and China, is developing reagents for a process called polymerase chain reaction to allow for the testing of combinations of drugs to treat Covid-19.

"(Biotech) is our best performing sector at the moment," Dr Tan told The Business Times. "We have two companies that are quite active in the coronavirus space and it has changed the potential of our portfolio because suddenly we are in the thick of things."

Vickers typically backs startups it sees as developing novel technologies that will have a deep impact on the market. Its sixth fund will invest in biotechnology, nanotechnology and artificial intelligence with cheque sizes ranging from US$5 million to 10 million.

Fund VI's US$200 million in commitments, which exclude those from general partners, were largely raised from existing investors. Some new investors were also involved, and the largest groups were pension funds from Europe, Switzerland, Germany and the US.

Half of Fund VI will be deployed into best-performing existing portfolio companies like Samumed, a strategy that Vickers uses across all its funds. Samumed, in particular, is one of the firm's biggest treasure troves – the San Diego-based biotech is among the highest valued healthcare startups in the US with a US$12 billion valuation.

With the virus outbreak rattling investors around the world, Dr Tan said fundraising for Fund VI is expected to be delayed. Investors will need time to rebalance their portfolios and reassess risks and opportunities.

"But in the meantime, we believe our portfolio will perform and we can show that we are resilient. And hopefully that's a good track record to have to complete our fundraising," said Dr Tan.

He added that the firm is almost totally unaffected by the current economic downturn, because of its investment emphasis.

"This is because we avoid investing in companies that have market risk... We are (instead) affected by whether we spotted the right company and that technology works as we predicted."

Asked whether the downturn is likely to have an impact on exits, Dr Tan said that all "initial public offerings (IPOs) will be stuck".

"Thankfully, we don't have any IPOs that are going out now. Our closest one was in the fourth quarter of this year in China. So I don't know whether there is a delay – there could be. And if there is, there is, and it goes to the next quarter, that's fine."

He said the firm has "a couple" of portfolio companies that are planning to go public next year. "I think that might be delayed by six months? But there's nothing imminent that is going to affect them. That six months is not going to affect us too much."

Vickers had a partial exit when enterprise security firm Hillstone Network was listed on the Shanghai Stock Exchange's STAR market – the bourse’s science and technology innovation board – in October 2019. Hillstone Network's share price rose by 112 per cent after the first day of trading, and the firm had a market capitalisation of 7.8 billion yuan (S$1.6 billion) as at market close on Thursday.

Other firms that Vickers has exited fully or partially from include Asian Food Channel, TWG Tea, fintech firm M-DAQ and JJE, a developer of motor systems for electric vehicles. 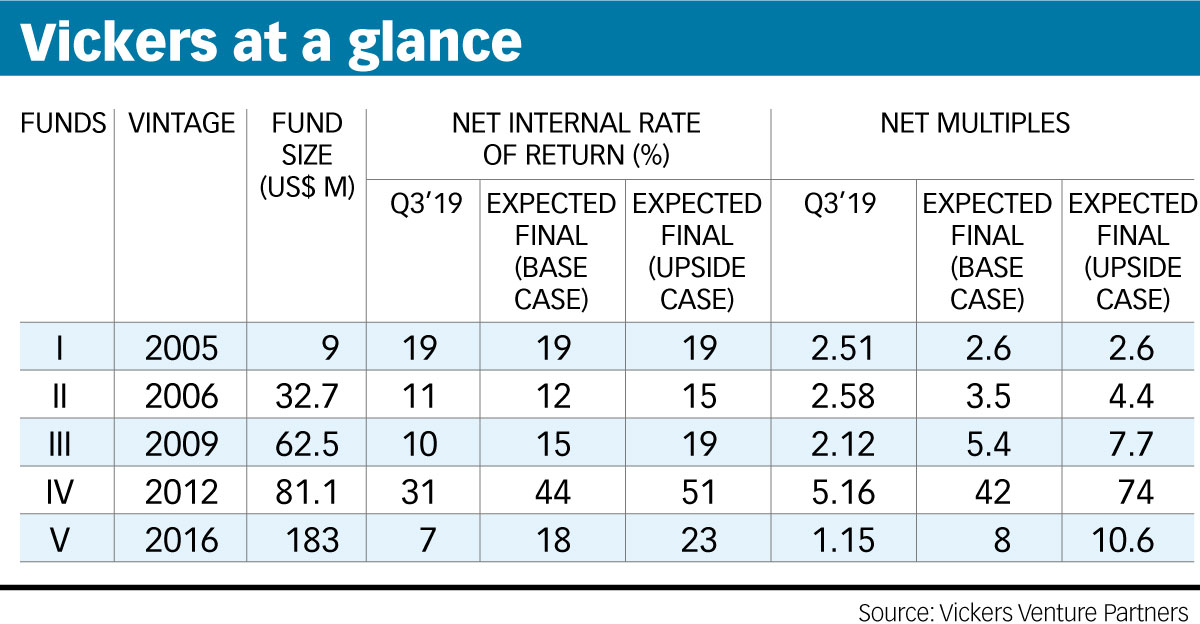 Not 'business as usual': How can social entrepreneurs fight coronavirus?

[LONDON] As leaders who aim to solve a diverse range of problems, from poverty to pollution, social entrepreneurs...

[SAN FRANCISCO] Airbnb lowered its internal valuation by 16 per cent to US$26 billion, as the US home rental firm...

THE Covid-19 outbreak has sent demand for grocery and food delivery services spiking, testing the resilience of...