New Zealand: Where stories are born

Many know New Zealand as a fairytale land of breathtaking beauty and adventure, but The Land of the Long White Cloud is also rich in fascinating stories

Once upon a time in Auckland, a city in New Zealand’s North Island, there lived a young couple named Robyn and Nicholas Jones. They did not want to live predictable lives, so they bought a property on Waiheke Island in 1992 and relocated there with a dream: to transform the place into a thriving vineyard and live off the land, happily ever after.

Despite initial challenges, the couple persevered and added mud-brick buildings that later became a barn, a winery made from mud brick — which they discovered met ideal conditions for ageing and storing wine — and a restaurant.

It is easy to see why the Joneses were enamoured with Waiheke Island, a coastal haven just 40 minutes away from Auckland by ferry. Its pristine beaches and coves make an idyllic setting for a swim or leisurely kayak around the bay.

Known as New Zealand’s “Island of Wine”, Waiheke Island is also home to boutique wineries that are responsible for churning out some of the country’s best Bordeaux.

Back on the mainland, the history of New Zealand goes like this: Around 700 years ago, its indigenous people migrated from Polynesia and settled on the land, developing ways to harness its geothermal resources. Over time, they developed a Maori culture built on kinship. 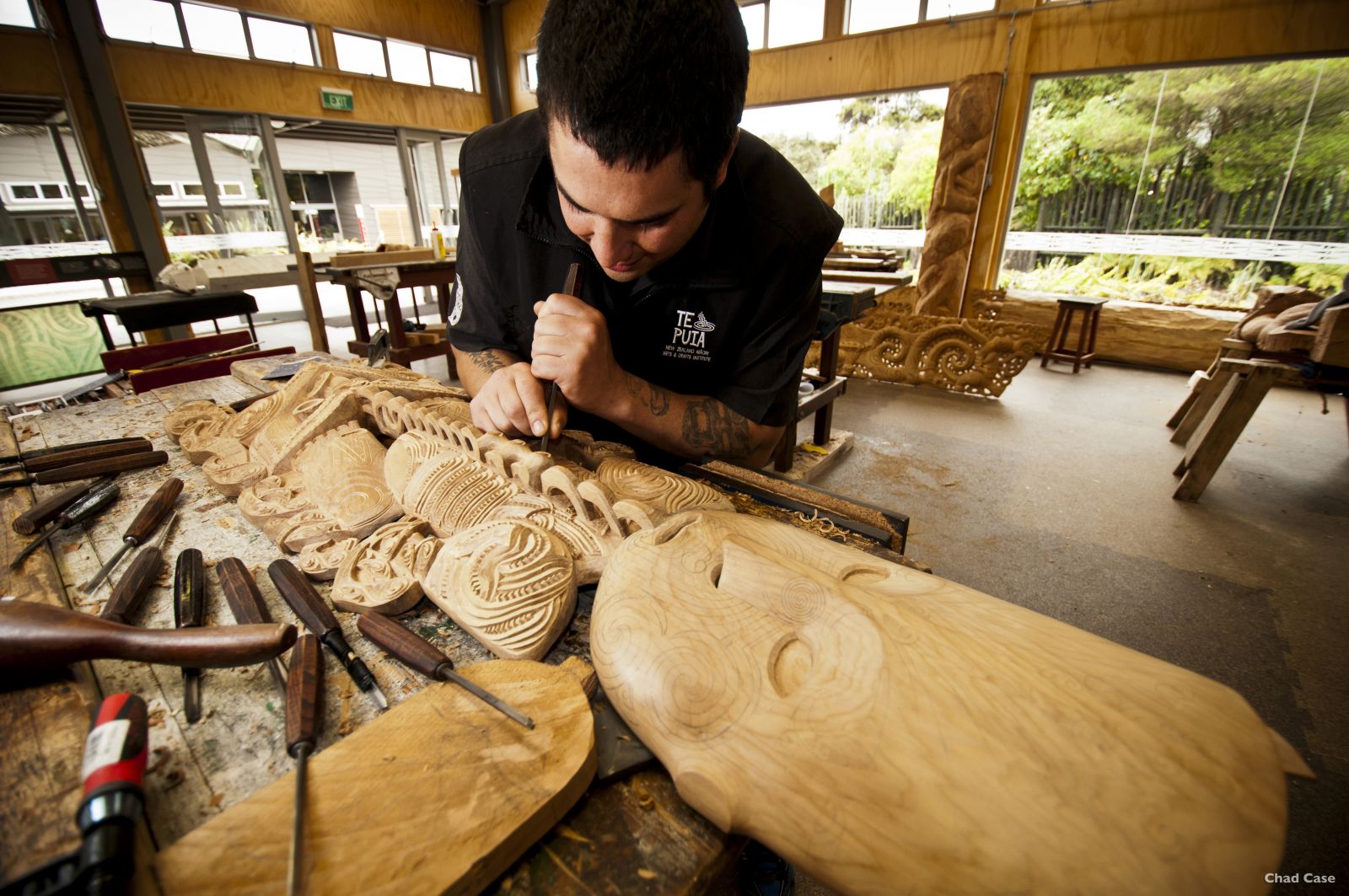 The heart of Maori culture now lies in Te Puia, which has been dubbed the “warmest place in New Zealand” — both literally and figuratively. A five-minute drive from central Rotorua in North Island, it is home to Pōhutu geyser, the largest active geyser in the Southern Hemisphere, as well as bubbling mud pools and hot springs, which are still used for ingo, a Maori cooking technique where food is placed in flaxen baskets and lowered into the boiling water.

Visitors to Te Puia will get to experience the Maori’s renowned hospitality, witness cultural performances, and watch traditional weavers and bone carvers at work. Those who wish to take home a more meaningful souvenir can consider getting a Maori tattoo, or tā moko.

Getting a tā moko is a sacred and profoundly personal rite of passage for the Maori, who take great pride in the stories behind their tattoos and what they represent. As a result, no two Maori tattoos are alike, deepening its connection with its bearer.

On the theme of preservation in action, New Zealand’s largest kiwi hatching and rearing facility began life in 1929 as a derelict dairy farm on a swamp. The place underwent several incarnations over the years before settling on its final identity as Rainbow Springs Nature Park, which is now known for its kiwi conservation efforts.

Here’s an interesting fact: There are only 68,000 kiwis left in New Zealand, and every day two per cent of its wild population is lost. Without protection, experts estimate that kiwis will become extinct in two generations. To help preserve New Zealand’s beloved national bird, Rainbow Springs incubates and hatches kiwi eggs from around the North Island. To date, the park has hatched over 1,800 eggs since they received their first one from the Tongariro Forest Kiwi Sanctuary in 1995. 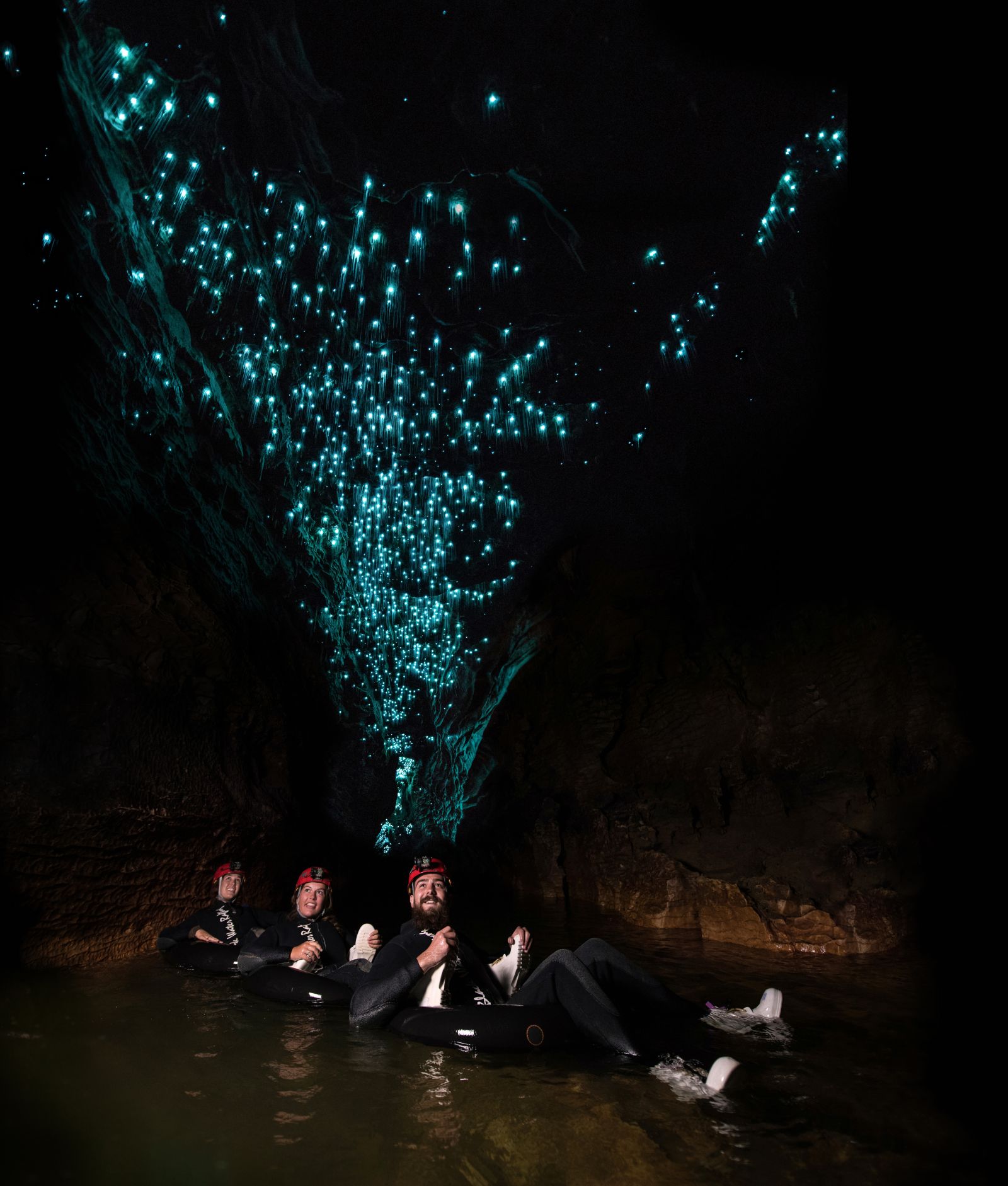 A trip to the North Island would not be complete without experiencing black water rafting in the magical glowworm-studded Waitomo Caves. Photo: Shaun Jeffers

Before ending your sojourn in the North Island, you have to check black water rafting off your adventure bucket list. Similar to white water rafting, black water rafting requires you to navigate the rapids, but in an underground cave illuminated by glowworms. A species unique to New Zealand, the arachnocampa luminosa glowworms dot the ceilings of the Waitomo Caves, making for a magical sight.

First explored in 1887 by local Maori chief Tane Tinorau, the Waitomo Caves was handed over to the government’s care in 1906 and were only returned to Chief Tinorau’s descendents in 1989. Many of the caves’ guides today are his direct descendants, who bring stories of the cave’s discovery to life for visitors.

Continue your storybook adventure around New Zealand with a trip to the South Island. An Air New Zealand domestic flight will get you there from Auckland in just over an hour.

Upon arrival in the South Island, take a scenic drive up to the west coast where Milford Sound sits. The magnificent fjord was carved out of glacial erosion during the Ice Age, and is now flanked by cascading waterfalls and majestic peaks at every turn.

A scenic cruise around the spectacularly beautiful Milford Sound is a must-do for travellers to the South Island. Photo: Rob Suisted

Over 1,000 years ago, Maori explorers discovered and travelled to this unspoilt destination to fish and hunt. In the late 1800s, the first European settlers arrived and tales of Milford Sound’s stunning natural beauty spread. From 1935, roadworks to create tunnel access to the fjord began and were finally completed in 1954.

A great way to explore Milford Sound today is via an epic kayaking adventure; if you’re lucky, you might even catch sight of fur seals lounging on rock faces or dolphins swimming alongside as you paddle around the fjord on a kayak. If you prefer to kick back and unwind, choose from a variety of cruises with Real Journeys. Some cruises include an overnight stay on the Milford Wanderer, with private cabins, meals and a specialist nature guide. 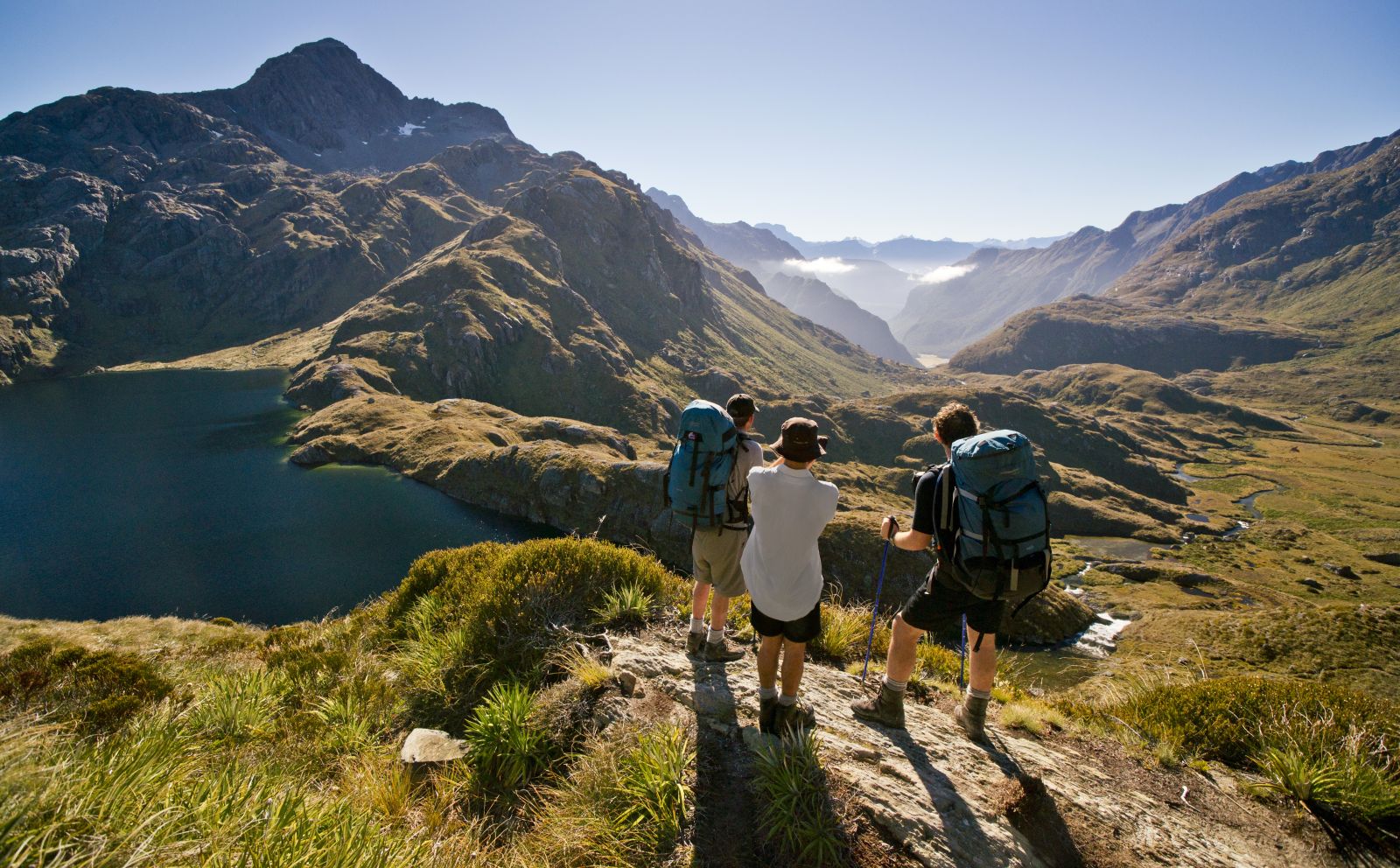 Fancy a walk on the wild side? New Zealand has plenty of iconic hikes to offer. Legend has it that early Maori travellers had forged tracks through the fjordlands to hunt and gather stores of the precious greenstone pounamu. Pioneers and gold prospectors soon followed, creating new paths of their own.

Two of those tracks became the famed Milford Track and Routeburn Track, two of the nine Great Walks of New Zealand. Guided walks are offered by Ultimate Hikes, with expert guides and comfortable modern lodges for you to fuel up and rest at each night before taking  off the next day.

With such glorious landscapes that look like they belong on your computer screensaver, isn’t it time to book your Air New Zealand plane ticket and pay a visit to this storied land?

From Oct 1, 2019, all visitors will need to apply for a travel visa to New Zealand. 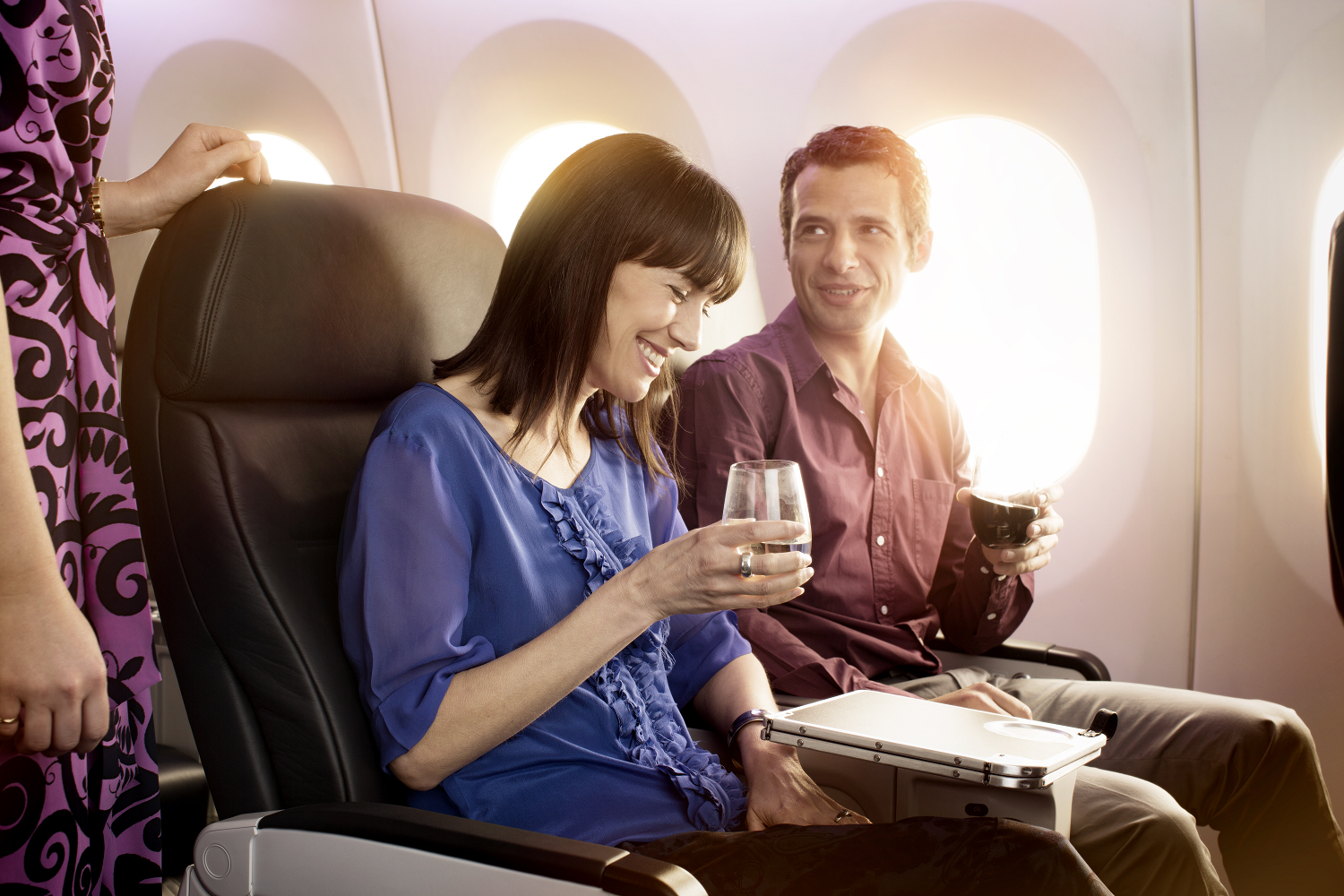 Awarded Best Premium Economy Class in the World for three consecutive years, the flight will transform air-bound travel experiences as you know it.